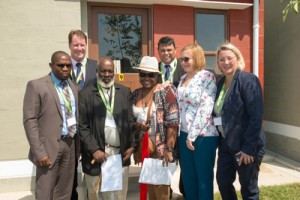 The new suburb in the Fisantekraal district near Durbanville, Western Cape – Greenville Garden City – was officially launched in March by the Premier of the Western Cape, Helen Zille, with the delivery of the first of the planned 17 000 houses.

To be developed in phases over the next 16 years, Greenville Garden City is a public/private collaboration between Garden Cities (1919) the oldest and largest developer of suburbs in the Western Cape, and the City of Cape Town.

The project, which is set to revolutionise housing development through the application of innovative materials and technology that exceeds the performance of traditional construction methods and significantly accelerated speed of construction, will set a very long-term standard.

John Matthews, Group CEO of Garden Cities and President of Master Builders Association – Western Cape, says that Greenville Garden City is his company’s most important project in its 97-year history. “There will be a wide variety of residents from different economic sectors within the 767 hectares, all of which will be recognisable as a Garden Cities development with the quality and aesthetics which that implies,” said Matthews.

“The biggest challenge for the Cape Town metropolis is the estimated influx of an additional 700 000 people by 2030,” said Provincial Minister of Human Settlements Bonginkosi Madikezela.

His view was endorsed by the Premier when she said “South Africa is not a place for sissies. We have to roll up our sleeves and vasbyt – not look for the easy solutions. The irony is that the projects that do the most good are often those that are the most difficult to deliver;” referring to disputes that often arose from different interest groups that could disrupt or even derail enterprises.

The delivery of Greenville Garden City has taken eight years of planning, through many stages and changes.

Initiated by the nearly 100-year-old residential suburb developer Garden Cities, the project finally matured into a public/private partnership with the City of Cape Town, through which the government grants to beneficiaries are administered. The company owns the 767 ha of land where an entire infrastructure, including 12 primary and high schools, an integrated transport hub and a range of community facilities will be built.

It will be responsible for the development through a project team of building professionals including facilitation, financial and legal support.

John Matthews, Group CEO of Garden Cities, said that the project has been the highest priority for his team over the past eight years. “Greenville is our fast-realising dream of restoring dignity to our people,” said Matthews. “It is our opportunity to make it a means of true upliftment and better social conditions.” More than 110 local Fisantekraal residents are involved in the construction of the project.

The schedule is to deliver 40 houses per month, constructed using the innovative Benex blocks, invented in Australia and now manufactured at a nearby factory in Epping, where previously unskilled and unemployed local people are producing the product.

Speaking of the Benex Blocks and other highly efficient materials used in the construction of the houses, the Premier said that the blocks were a metaphor for the perfecting and export of new technology in South Africa.

Councillor Benedicta Van Minnen, Mayoral Member for Human Settlements’ said in her address that “A truly integrated, sustainable human settlement is being constructed, with all social, economic and transport amenities. This project is an example of how the City of Cape Town wishes to manage its residential developments going forward by locating future residential areas for all income groups in relation to economic and work opportunities.

“We are moving towards a new delivery model. The Greenville Garden City development is in line with our densification policy and our transport-oriented development and integrated human settlements frameworks which is, among others, based strongly on partnerships and innovative solutions to mitigate the challenges resulting from increased urbanisation.”

The project has been described as having national and local award potential and a model for all future private/public partnerships.