Geotechnical wizardry at Village Walk …
… a story of great teamwork
From a geotechnical perspective, the complete overhaul of the Village Walk site has been sufficiently challenging for Franki project manager Paulo Alves to say that this was one of the most incredible projects he has ever worked on. “It has been a complex, often difficult and unpredictable project with both logistical and technical challenges that, in combination, made this a unique task,” says Alves.

The Project
At one time the ‘Mecca’ of Johannesburg fun-loving teenagers, the Village Walk complex is well known to the residents of Johannesburg. Of course – and central to this story – its fame was enhanced by its neighbour, the iconic Balalaika Hotel and more recently by other famous names like Nedbank, Protea Hotel, Holiday Inn, HSBC and others. With the centre struggling commercially, the savvy Eris Properties took the opportunity to develop and construct a totally new office/retail hub in the middle of the most valuable square mile in Africa.

“In essence this is the short description of this project,” Alves says, “however the challenges were complex and numerous.”

The first thing that Franki had to do was to support the existing basement walls neighbouring the Balalaika and Protea Hotels. “This first phase was crucial, as these walls supported those buildings and any mistake in calculation would have been disastrous,” Alves says.

The action on this first phase was to support the walls with 249 no. four-strand anchors and, simultaneously, 82 no. soldier piles were installed on the northern and eastern faces, namely Maud Street and Rivonia Road respectively. This took from December 1st 2014 to the middle of April 2015. Shortly before the end of this phase permission was given to proceed with phase 2, which was to demolish the existing four-basement parking garage, excavate according to the new plans and then laterally support the remainder of the site. 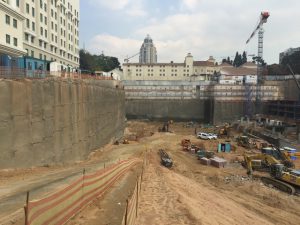 This description of the scope of works gives the impression that there was a neat chronology to the various activities on the site. The reality was that the three main disciplines – geotechnical, earthworks and demolition – were working together on a small site and this presented enormous challenges, which were overcome by Franki’s (the principal contractor) strong leadership and the excellent cooperation between the contractors. “This job epitomised the excellent relationships that existed between all who were involved,” says Alves. “From the client, Eris Properties, through to the project managers SIP, AECOM quantity surveyors, Aurecon engineers, Boogertman and Partners architects through to the contracting team of Franki, earthworks specialists Zero Azania, Phoenecian Demolition, Pro-Frag Drilling and Blasting and Diamond Cutting and Coring Company, there was a cooperation and understanding that made the success of this job possible.” 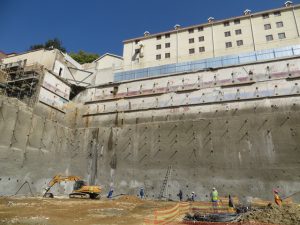 In fact, one of the most important, and intricate, tasks – and one which happened almost ‘behind the scenes’- was the separation of the basement from the existing structures of the Balalaika and Protea Hotels. Alves explains: “This was achieved through precision cutting and sawing by the Diamond Cutting and Coring team under the supervision of Aurecon who ensured that the cuts were made in exactly the correct positions. There was absolutely no extraneous damage in this critical operation.”

Other works that involved the surrounding buildings were civils jobs that, although relatively minor, were critical in that they made it possible for these neighbours to continue their day-to-day business uninterrupted. These included: the regrading of the Holiday Inn Hotel entrance; the creation of emergency walkways for safe passage to and from all the surrounding hotels; erection of all the hoarding around the site and making safe the common areas with the surrounding buildings; and the relocation of storm water and sewerage pipes.

Being cognisant of the needs of these surrounding buildings was integral to the overall challenge of this contract. In addition to all the ancillary civils work, Franki had to control the noise level and the dust. “This was exacerbated by very hard granitic rock that we encountered which required drilling and blasting. One can imagine just how controlled this operation had to be in order to do it not only safely, but also as quietly as possible and with as little dust as possible. Once again the teamwork was exemplary,” Alves says.

In a job of this nature, time is always one of the biggest considerations and there was lots in this regard working against Franki. Firstly, the work day was curtailed to strictly between 07:00 and 18:00. Secondly, time pressure came from the “unbelievable” volume of ground water present on the site, which resulted in the constant collapsing of the soldier-piled side walls, which necessitated the temporary casing of all the piles. Thirdly, the “maize” of underground services, which had to be avoided or moved and about which there was almost no information, slowed things down significantly. An anchor did in fact strike an underground sewerage pipe in a position that made it very difficult to repair.

A significant challenge as far as time was concerned was the 3000m³ of contaminated soil that was discovered, which was detected by a strong petrol odour. “We believe this may have been caused by an old petrol station on the site which had leaked petrol over many years,” Alves says. “We got Envirowaste to isolate the contaminated area and of course it had to be excavated with great care. This unforeseen challenge took its toll on time and delayed the programme somewhat along the Maude Street face. 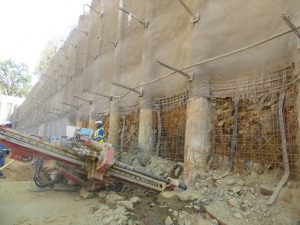 Alves explains: “The contaminated area was situated precisely where the first handover portion was. The building contractor was scheduled to take over the Phase 1 of the site at the end of October 2015 and the full extent of the contaminated area could not be determined at the time. Moreover, the contaminated soil was hard up against the lateral support face hence restricting the progress of this critical-path operation. However, with some creative lateral thinking we were able to make up the time lost and the building contractor was able to establish by the required date.”

Challenges galore! But Franki overcomes and the lateral support of the now demolished basement goes ahead as planned. In the geotechnical world the numbers tell the story:

185 no. 600 mm diameter soldier piles ranging in depth from 12 m – 28 m
13 no. 900 mm diameter cantilever piles to support 8m-high soil face and 29 no.125 mm diameter cantilever micropiles to support a 3,5 m high face with the emergency walkway immediately behind these.
249 no. four-strand anchors to support existing basement walls
954 no. strand anchors varying in capacity between 600 and 900 KN to regain the unique soil faces bordering the Maude Street, Balalaika, Protea and Holiday Inn Hotels
633 no. hollow bars/rock bolts
10 800 m² of gunite face
265 000 m³ soil excavation
About 60 000 m³ of rock blasting (bulk and hand blasting)

Alves says this was technically the most challenging project he has ever been involved in. “It’s difficult to tell the whole story in an article of this nature. This was truly an incredible, unforgettable contract, which, more than anything, displayed the power of teamwork,” concluded Alves.