“The Federated Employer’s Mutual Assurance Company (RF) Proprietary Limited (FEM) was established as a mutual insurer in 1936 and on the introduction of the Workmen’s Compensation Act 1941 was granted a licence to continue to transact workmen’s compensation insurance for the building industry.

“Vital issues occupied the minds of those attending the 1936 Congress of the National Federation of Building Trades Employers in 1936 in the Pretoria City Hall, foremost of these being the existing system of fixing wages and working hours on a regional basis, another being the relatively new Workman’s Compensation Act which had been passed in 1934 which replaced the Act of 1912 and forced all industrial employers to insure their workers against accident or injury.”

From the outset in those heady days FEM established close ties with the then National Federation of Building Trades Employers (now Master Builders South Africa), which both organisations have nurtured and grown all these decades to the strong symbiotic relationship we know today. 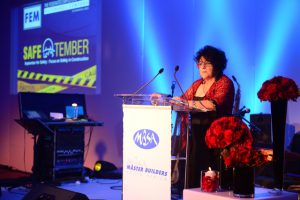 “One of the primary objectives we at FEM hold dear is safety at the workplace, on the roads and at home,” said Thelma Pugh, Managing Director of FEM. “Our long association with Master Builders South Africa and the Master Builders Associations around the country is a clear and natural relationship as the Master Builders are best placed to ensure the implementation of Best Practice in all facets of Construction Health and Safety for our policy holders.”

Today, in its 80th year of outstanding support and cover for its policy holders in the construction sector, the Federated Employer’s Mutual Assurance Company has revisited and refreshed its corporate identity. “Our new logo portrays the modern era in which we live and work, reflecting professionalism in all that we do in the clean lines of the design.”

“Lack of safety must be identified as one of the highest risks in any company,” said Pugh. “The risk is directly linked to compliance.”

The human tragedy surrounding an accident does immeasurable harm to the family, and extended family, leaving women and children without their breadwinners and increasing the number of widows and orphans.

Tip of the iceberg
Besides the seemingly obvious cost implications, an accident also has an immeasurable negative effect on the company. Research shows that 21 percent of the costs of an accident are direct costs – such as medical costs and loss of wages. “But this is just the tip of the iceberg: a massive 71 percent of costs are indirect, such as loss of reputation, low morale, loss of equipment, loss of skills, and project stoppage,” continued Pugh.

“We may be improving our poor safety record,” concluded Pugh, “But we are not sustaining the improvements and we need to get better.”