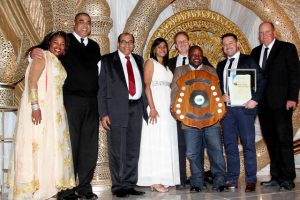 Following months of judging at various construction sites around the country, each of the Master Builders Associations put forward their regional winners, to form the National Awards. Presented by the President of Master Builders South Africa and Itumeleng Leshoedi, Manager: Occupational Health and Safety, MBSA, the winners in each category came forward for their awards.

Winners in the category Projects of R500 million and above, was the AvengGrinaker-LTA/Enza Construction – Joint Venture for the Dr Pixley Ka Isaka Seme Memorial Hospital Project in KwaZulu-Natal.