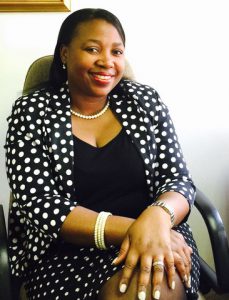 “The Judging / Audit Team comprised myself as Lead Auditor, Francois du Toit (Tokkie) and Ernest Pieterse, representing a wealth of knowledge and experience in construction health and safety. We found that the general standard of sites entered in the national competition was very high and overall we observed strong management commitment and support for health and safety.

Logistics and travel
In our travels we visited 41 construction sites across the country over a one month period, auditing an average of two sites per day. In some cases we’d wake up at 4am to catch the first flight. The team visited most of the MBA regions, including the Eastern Cape, Western Cape, Greater Boland, KwaZulu-Natal, the Free State, as well as Gauteng and the Northern Provinces. In most cases fair weather prevailed, although there was a little rain on one or two sites visited. 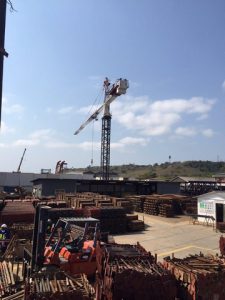 The first meet and greet meeting with the Independent Auditing team was at the King Shaka Airport, Durban), on the 19th of June. Pierre Fourie, Operations Director of Master Builders South Africa coordinated the introductory orientation meeting with the local KZN MBA Occupational Health and Safety Specialist. 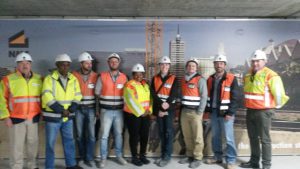 Where major contraventions or safety concerns were identified on-site these would immediately be raised with the site Management Team.
The hospitality shown us at all sites was heart-warming and we were well received by all MBA regional members.Throughout the audit period we were keenly aware of the passion around construction health and safety and the hunger to win the National Safety Competition was tangible. 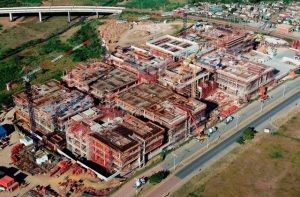 Methodology
The MBSA Construction Occupational Health-Safety-Environment Audit System (2016-latest revision) was used in conducting the audits.
The following audit procedure was followed for all the sites:
a. Key Four Essential Audit requirements confirmed with the Company Audited
b. Opening meeting was convened by the Lead auditor with the Site Management involved.
c. Percentage Status of the project and the site applicable items were confirmed.
d. Two phase Audit Procedure was followed and explained to the members: first Site Walk-about- to provide the auditors with an overview of the scope of work; followed by the documentation review to verify sampling collected on-site.
e. Scoring was completed by all three auditors independently and consensus reached amongst the team on marks allocation.
f. Closing meeting was convened by the Lead auditor with the Site Management thanking them for their participation in the competition.
Challenges faced
• Auditing sites where there is poor housekeeping;
• Sites with poor illumination inside the building;
• One site, on the day of the audit reported that their safety files had been stolen;
• Another site had mixed up dates and were not expecting us.

Recommendations
Further training is necessary in the following areas:
• Occupational health and safety Act Training is required for members, on legal appointments and the understanding of term “competent person”;
• On the employer’s duties and obligations, especially when outsourcing critical appointments;
• General Administration Regulations;
• Facility Regulation and its requirements 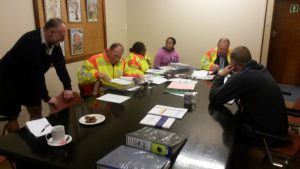 Conclusion
The audit was a great experience, with a team who made each day look flawless in hot, cold, windy, rainy and muddy weather conditions.
There is a need in certain regions for a re-workshop on the audit system requirement and the interpretation of the legislation for an effective implementation.

The Judges – Master Builders South Africa National Safety Competition 2016
Itumeleng Leshoedi – Manager Occupational Health and Safety, MBSA
Holds a B-Tech Degree in Safety Management with UNISA (University of South Africa); Certificate: Occupational Health and Safety management system (OHS 18001:2007); Graduate member of IOSH; Completed Chevron Head Office new building two year project as Health and Safety Specialist; 18 years of detailed knowledge of the health and safety.
Francois (Tokkie) du Toit – Managing Director; Graduate member of IOSH and SAIOSH; Graded as an OHS Professional with SAIOSH;
Approved as a Professional Construction Health and Safety Agent by the SACPCMP; Registered Fall Arrest Technician / Fall Protection Planner at Institute for Work at Height; Completed more than 50 Projects as Clients Agent. Conduct Audits as a Clients Agent since 2008.
Ernest Pieterse – An “Independent HSE Professional” with over 26 years in the Health, Safety and Environmental field. He holds a B Tech Safety Management and B Administration, is a Chartered Member of SAIOSH; a Graduate Member IOSH UK; and a Past member of Minister of Labours Advisory Council.