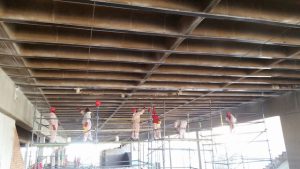 A globally acclaimed structural strengthening system from Sika was chosen for the refurbishment of Pretoria’s Mabopane Station, the third busiest railway station in South Africa handling some 115 000 commuters per day.

By identifying high-density activity nodes, called urban cores, the City of Tshwane’s Metropolitan Spatial Development Framework aims to restructure the city to promote economic development and growth. Since 2000, when it was recognised as one such urban core, the area around Mabopane Station has already undergone several massive upgrade programmes including access roads, 45 000m2 of retail facilities, as well as addition of a bus and taxi rank.

In 2016, it was the turn of the station itself to receive refurbishment. Commissioned by the Passenger Rail Agency of South Africa (PRASA) as part of its National Station Upgrade Programme, MMA Posten Engineers SA wasted no time in specifying Sika CarboDur S1012 plates SikaWrap-300 C, SikaWrap-600 C and adhesives, Sikadur-30 and Sikadur-330. Sika’s Peter van Eden was the Technical Sales Consultant advising on-site. 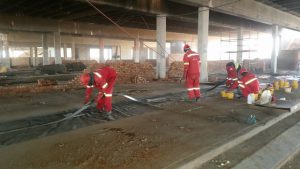 Specialist construction company, Freyssinet was appointed to apply the Sika system. Manufactured from carbon fibre reinforced polymer (CFPR), Sika CarboDur plates were bonded onto the station walls as external reinforcement. Although these non-corrosive, pultruded, laminates are extremely strong and durable, they are supplied in lightweight rolls allowing for easy transportation and installation. Sika CarboDur plates can be used in a variety of applications including increasing serviceability and durability, increasing load bearing capacity, or even for repairs to structural elements after earthquake damage. Extensive Testing and Approvals of this outstanding product are available from numerous countries worldwide.

Sikadur-30 (800 kits), a thixotropic, structural two-part adhesive based on a combination of epoxy resins and special filler, was used to bond a total of 10 420 meters of Sika CarboDur S1012 plates. Easy to mix and apply, Sikadur-30 provides excellent adhesion, hardens without shrinkage and is impervious to liquids and water vapour.

Constant dust from construction and earthworks in the vicinity hampered the project while moving scaffolding around the busy station proved a further challenge for the contractor. As part of the specified structural strengthening system, SikaWrap-300 C (800 m) and SikaWrap-600 C (1 200 m) were applied to the station walls. Manufactured from unidirectional, woven, carbon fibre fabric with mid-range strengths, both products are low density for minimal additional weight, and are used in many different strengthening applications to increase flexural and shear loading capacity on reinforced concrete, masonry, brickwork or timber.

Sikadur-330 (869 kits), a two-part, thixotropic, epoxy-based impregnation resin/adhesive was used as a bonding agent for the SikaWrap products. Easy to mix and apply, it provides good adhesion to many substrates and requires no separate primer.

Structurally strengthened by such state-of-the-art products, Mabopane Station is destined to stand proudly for many years to come as the hub of this important urban core while the highly progressive City of Tshwane Municipality is a step closer to realising its ambition of becoming an African Capital City of Excellence.