SAISC calls for entries for the AVENG Trident Steel Awards 2017

SAISC CEO Paolo Trinchero says that after the high standard of the 2016 Awards there has been extraordinary expectation throughout the steel construction industry in relation to this year’s Awards.

AVENG Trident Steel is the main sponsor for the 2017 Steel Awards
The Awards will take place on the 13th of September 2017 in Gauteng, Cape Town and KwaZulu-Natal. 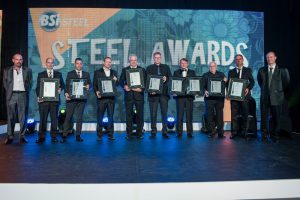 Project nominations for the awards are now open.
Any project team member involved in a construction project can nominate it, provided that a Southern African steel constructor played a significant role in the project.
Project categories are determined by entries received, but set categories for the 2017 Steel Awards include: ASTPM Tubular Category, Global Roofing Solutions Metal Cladding Category, Safintra Factory and Warehouse Category, MiTek Light Steel Frame Category and the SAFAL Innovation Category

The best photograph of an entered project also wins an award.

For a detailed guide on the project nomination process and fee, visit www.saisc.co.za