This summary will be followed by a detailed report on Congress 2017 in the October issue of SA Builder.

Recognised as the de facto representative body for the South African construction industry, Master Builders South Africa annual Congress assembled a formidable array of speakers from the construction sector, government departments, health and safety specialists, and other industry bodies, to debate and tackle the challenges facing the sector. 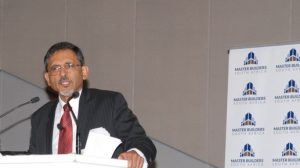 In his keynote address the Minister of Economic Affairs, Ebrahim Patel, revealed that government will, over the next two years, significantly boost infrastructure spend by some R270 billion per year with the aim of cementing certainty within the construction and related sectors. “Working closely with the National Treasury it is our aim get bricks and mortar onto the ground and to create an environment of certainty across the South African economy, specifically within the construction sector, for as far ahead as ten years hence,” said Minister Patel.

The event was well attended by, amongst others: Master Builders Associations and their members from all regions of the country, Master Builders SA office bearers and Past Presidents Past Presidents Eunice Forbes and Nico Maas, construction companies, captains of the construction industry, government bodies, the Construction Industry Development Board (CIDB), Federated Employers Mutual Company (FEM), leading manufacturers and suppliers, project managers, engineers, architects and designers.

Earlier, Clint Wicomb, General Manager: Coastal Region – PPC – the primary sponsor of the event said: “Very few industries have the opportunity to change the lives of all South Africans as much as the construction industry. It is our aim at Congress 2017 to find more effective ways to build sustainable structures to the benefit of all aspects of our nation.”

At a gala dinner hosted by FEM, the winners of the Master Builders South Africa National Safety Competition were announced. The winner of the FEM Super League Trophy for Projects R500 Million and Above was awarded to the Stefanutti Stocks and Basil Read Joint Venture (SSBR JV) for their outstanding safety performance at the Kusile Power Station.

Also at Master Builders SA Congress 2017, stakeholders in the construction industry exhibited their products and services.