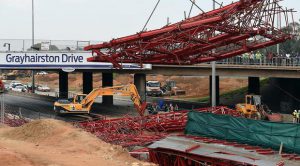 Following yet another postponement on Wednesday, the commission investigating the collapse of the Grayston/M1 pedestrian bridge confirmed that 21 witnesses would testify when it resumes next year.

Following a two-day sitting at the Department of Labour’s offices in Pretoria, its commissioner Lennie Samuel postponed the inquiry.

But before the postponement, testimony from Form-Scaff expert witness Gary Farrow was heard.

Farrow, an Australian mechanical engineer, took the commission by surprise on Tuesday when he produced a report that neither the commissioner nor Murray & Roberts had seen.

Samuel then decided along with all legal representatives of the stakeholders that in the interests of completing the hearing without undue delay, further continuation with Farrow could make the hearing unmanageable.

Samuel then decided the information presented was sufficient to continue without further cross-examination and accepted the proposals from the legal representatives. He, however, said: “Should the need arise to recall expert witness, I will not hesitate to do so.”

The commissioner set aside July 2 until September 2018 for completion of the case, which were the only dates on which all the legal representatives said they would be available.

The Section 32 inquiry was set up by the Department of Labour following the collapse of the temporary pedestrian bridge on October 14, 2015 about 3:25pm.

The construction of the pedestrian and cyclist bridge commenced on January 29, 2015.

It was originally expected that it would take about six months for the public to know the exact cause of the collapse. The inquiry has experienced numerous postponements.

The commission was appointed by the department in terms of the Occupational Health and Safety Act.