Zeitz MOCAA Museum – a work of architectural and engineering beauty 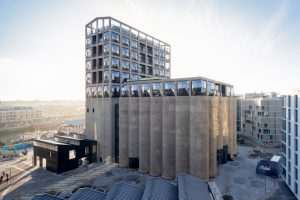 The historic grain silo situated in the Victoria and Alfred Waterfront dates back many years to a time when most of the country’s trade was conveyed on the high seas or via steam train. Completed in 1924, the Silo dominated the skyline of the city at 57 m tall.

Constructed by SA Railways and Harbours, the facility consisted of a suite of buildings including the storage annex, elevator building, dust house, dust cyclone and track sheds. The facility processed hundreds of thousands of tons of wheat, maize, soya and sorghum. It was sited to take advantage of its connectivity to the docks and the supporting rail infrastructure. An iconic building, it is considered an important contributor to Cape Town’s urban character. Consequently, it is heritage-listed by Docomomo South Africa (See http://www.docomomo.com and https://goo.gl/CgFD3O) . By 2001, the old Silo had become redundant. 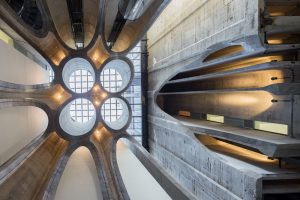 The Silo now lends it name to and forms the centre piece of a new district within Cape Town’s famous V&A Waterfront, a redevelopment project which started in 2010 as a mixed commercial, residential and leisure hub to the east side of the V&A and connecting it with the CBD.

With the completion of a massive re-purposing and refurbishing programme at the former grain Silo, the Silo District is almost complete.

Architectural photojournalist, Gareth Griffiths, a materials scientist by academic training, has been tracking and documenting the redevelopment of the Silo District at the V&A Waterfront. Of particular fascination has been the role played by the original concrete, cast in the 1920’s and reaching maximum strength by the time the building was re-purposed. According to lead design architect, Thomas Heatherwick of the famed Heatherwick Studios in London “We expected a rather cold surface inside the museum, but as we began to work with portions of the old concrete, we realized that it imparts a rather unique character to the building inside – a rather warm one at that.” 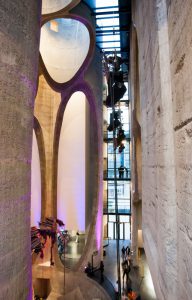 The final phase of the grain silo project has been the completion and handover of the building to the used partly as a boutique hotel which opened early in 2017 but principally as as the Zeitz Museum of Contemporary Art Africa (MOCAA) which took place in September 2017.

But how does an organic building such as a grain silo morph into a breathtaking gallery, housing a premier art museum and a boutique hotel?

• An elevator building which received, hoisted and then gravity-fed incoming grain from a rail loading point to various storage bins inside the complex.

By clearing out a portion of the highly compartmentalized internal structure it was possible to create a series of exhibition spaces.

The intention was to convert most of the total existing volume to 80 separate gallery spaces, education spaces, reading rooms, meeting and conference space, plus a huge atrium area beyond the main entrance, rising 30 m and 20 m across. This atrium occupies the space of 12 of the former silo cylinders and is arguably the most imposing feature of the new building. Walking into this chamber, one is given the impression of being in space – weightless and shaped with massive curved dimensions. Suspended overhead, the impression of zero gravity is provided by gigantic ‘hanging’ silo cylinders (as cut) which form the concentric ring arch above. 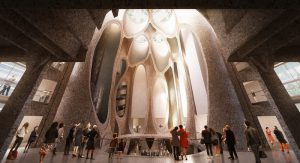 In the words of Thomas Heatherwick: “Inside we were in danger of losing the extraordinary cellular structure, so we created a space that would help the visitor understand the building. So, you would walk in and navigate around. We took the idea of taking just one of those billions of grains of corn so that we could scale it up and use it as a model for the cutting tool to cut through.”

A core concept in reinforcing the strength of the remaining silo tubes so that they could be left in place and cut to the architect’s design, is the use of an inner concrete ‘jacket’. Using concrete supplied by AfriSam to engineer’s specification, the inner circumference of each silo tube was re-lined with 200mm thick reinforced concrete to its exact cut dimension.

By way of a design element that is a first in Africa, Zeitz MOCAA is serviced by by Category A climate control in the galleries. The technology has been endorsed by the International Council of Museums (ICOM) and is used in internationally renowned galleries such as Pompidou Metz, Pulitzer and Paul Klee. 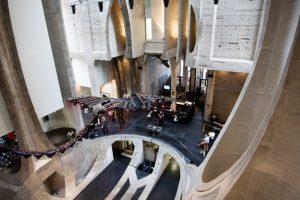 The technology offers the highest level of protection to a collection and is the most advanced climate control technology available at present. It will allow MOCAA to exhibit any piece of art, no matter how fragile. In line with other V&A Waterfront buildings, much of the climate control is based on renewable energy – in this case the chillers utilise the district sea water plant.

Of course, the official opening of the Museum in late September was the most remarkable affair, with developers functions, an international press conference attended by media from all around the world and an official public opening presided over by Archbishop Emeritus and CT Mayor Patricia de Lille – veterans in the struggle and fittingly opening the Zeitz MOCAA on the Heritage Day long weekend. “The mark of any advanced civilisation is the collective achievements of that civilisation. If we understand each other better, which really is what art does, we create a world we all want to live in. I think that is what is so extraordinary about this moment – this museum – and the collective vision and labour of those that brought it to fruition. This museum is a symbol and an icon of the confidence we feel about being Africans, the confidence we feel about our place in the world” said Mark Coetzee, Executive Director and Chief Curator.

“I built my collection with a museum in Africa always in mind – the fact that these works will now be accessible to all is a very emotional thing for me personally and ultimately gives the art true purpose,” said Jochen Zeitz, Co-Founder and Co-Chairman.