Nothing wasted, everything gained 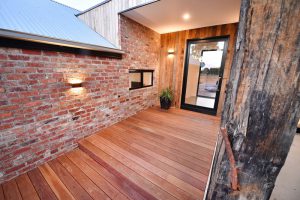 This ultra-modern, sustainable home makes extensive use of recycled materials. To ensure energy-efficiency it incorporates the best of passive design including clever orientation, double glazing, cross-ventilation, strategic shading and the thermal mass of clay brick.

Clay bricks are highly durable and have a life expectancy of hundreds of years. Bricks can also be reused, which minimises waste and distributes their carbon footprint over an extended life span.

Reduce, Reuse, Recycle
Renovation of an existing building can result in significant reductions in both cost and environmental impact compared with levelling the site and rebuilding. Because of aesthetic appeal and longevity, brick masonry buildings often are chosen for reuse. In many cases, load-bearing brick buildings are reused in their entirety. In other cases, the brick walls retained while new facings and extensions are built around the core.
Because of the desirability often associated with genuine brick buildings, adaptive reuse of brick masonry is increasingly popular saving both resources and energy.

Use of salvaged materials avoids the environmental impacts associated with new products. Salvaged brick can be reused, although material performance tests of very old bricks should be done if they are to be used in load-bearing structures. Because of the small, modular nature of brick, scrap brick on construction sites is easily crushed and used for landfill. It is commonly used as sub-base material for pavements, on quarry roads or even as aggregate for concrete.

Due to the strength of clay brick pavers, there is a flourishing market for old pavers, which is used to restore damaged driveways and paths. Because brick is so hardy, packaging on palletised, newly-purchased bricks is minimal and easily recycled. 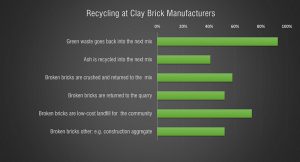 The brick industry in South Africa is committed to minimising waste and to managing any remaining waste responsibly. As a result, the volume of waste per tonne of production is very low compared with international counterparts, equating to 0.75% when it was last measured in 2014. Numerous initiatives completed by the clay brick industry over the past two years have further reduced these numbers. 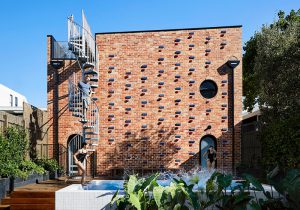 Small red- and blue-glazed bricks are combined with recycled clay brick to create an interesting play of light, shadow and colour on this three-story exterior wall. A one-bedroom “studio” has been innovatively extended into a family home – with swimming pool.

Both unfired (also called green) and fired brick are recycled during the manufacturing process. The CBA’s recently completed LCA (Life Cycle Assessment) shows the following efficient use of brick waste during production:

Dematerialisation
Dematerialisation – where bricks are perforated with holes during manufacture – is another way to reduce waste. This decreases raw material and water use during forming as well as reducing energy use during firing. Contractors also prefer perforated products because the bricks are lighter and easier to handle and transport.
However dematerialisation presents challenges in handling the brittle green bricks before and during firing. Several South African brick makers have invested in technology that now allows them to offer perforated products to buyers.

This type of investment in advanced manufacturing techniques supports the clay brick industry’s commitment to the ‘triple bottom line’ – it benefits brick makers, the environment and the communities in which these operations are situated.