Millennials are not only the most tech savvy generation but have new perspectives on complex issues, new approaches to solving age old dilemmas and innovative solutions to problems that have stymied previous generations. 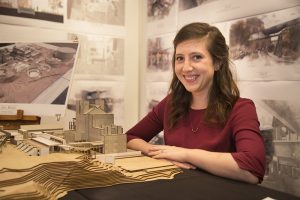 Renée Minnaar of the University of Pretoria is the winner of the 31st Corobrik Architectural Student Awards. She is pictured with her thesis model, entitled Remediator – Restoring the dichotomous relationship between industry and nature through an urban eco-textile mill and dye house

This year’s winner of the Corobrik Architectural Student of the Year Award, Renée Minnaar from the University of Pretoria, is one such game changer. Her thesis, entitled, ‘Remediator – Restoring the dichotomous relationship between industry and nature through an urban eco-textile mill and dye house’ impressed the judges with its insightful way of tackling quintessentially South African issues that cross generations and present compelling reasons to rethink the local built environment in South Africa. 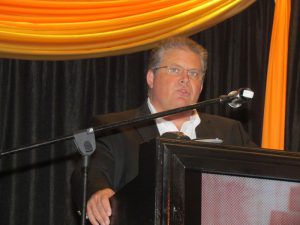 Speaking at the awards ceremony at the Hilton Hotel in Sandton, Johannesburg, CEO of Corobrik, Mr Dirk Meyer, said that it was an honour to recognise the present and future contributions of those who were entering the design and construction realm at a time when meaningful solutions to age old problems were becoming more urgent than ever.

In this annual competition, the country’s best architectural students from eight major universities were identified based on their final theses and presented with awards throughout 2017. The winners of each of the regional competitions competed for the national title and a prize of R50 000.

Judges for this year’s Corobrik Architectural Student of the Year Award were Maryke Cronje from Project Worx in Pretoria, Luyanda Mphalwa from Design Space Architects in Cape Town and Tanzeem Razak from Lemon Pebble Architects in Johannesburg.

“As this competition enters its fourth decade, we are all too aware that the context in which the architects of the future will be operating is changing extremely rapidly,” he said.

Meyer said that the rapidly changing design technology and software that was now at the disposal of up and coming architects like the eight finalists for the 2018 Corobrik Architectural Student of the Year Award, were just part of a far bigger picture.

Today’s young professionals were not only looking to rapid and meaningful solutions backed by superior technology and connectivity but were also demanding a degree of authenticity that was often missing in the past.

“This year’s theme is technology and the ever changing landscape. This is an exciting time for clay brick which is essentially a technology that has stood both the test of time and change. A technology that drove the original industrial revolution is today addressing pressing issues such as environmental degradation and sustainability. Now, more than ever, the fact that clay brick is durable, non-toxic, reusable, energy efficient and low maintenance will be key,” he said.

Speaking at the awards event, principal of 26’10 south Architects, Thorsten Deckler, highlighted current brick trends, highlighting the Barnato Hall project. This a five floor extension to an existing, prominently located residence on the University of Witwatersrand’s West Campus and includes the innovative use of exposed brick facades employing a range of face bricks produced by Corobrik. It addresses the urgent need for student accommodation during a difficult evolution in the history of tertiary institutions in South Africa.

Minnaar, who currently lives in Newlands with her husband, grew up in Pretoria. “I believe in always giving 110% when it comes to my work, to prevent feeling like I could have done more at the end of a project. When I am not aspiring to become an architect, I enjoy cooking, hiking and staying busy with various creative projects, “she explains.

Her dissertation, entitled Remediator – Restoring the dichotomous relationship between industry and nature through an urban eco-textile mill and dye house, investigates the potential of redundant industrial sites like the old Johannesburg Gasworks to mitigate the environmental and social issues resulting from the past to reintegrate the site back into the surrounding urban fabric.

She says that industrialization brought about dramatic changes in many major cities around the world, including Johannesburg. However, rapid technological advancements have resulted in the abandonment of many industrial sites often within the confines of expanding cities as is the case with the old Johannesburg Gasworks.
The repercussions of the hazardous industrial processes of the past are still present on the site in the form of pollution. This, together with South Africa’s lack of protection of our industrial heritage, has awoken the fear that these post-industrial artefacts might be in danger of becoming extinct if their value is not recognised.

“Through the understanding and application of environmental and heritage theories, this dissertation hopes to find a means of using architecture as a tool to mediate the dichotomous relationship between industry and nature, resulting from an exploitative world view, and inspire a new archetype for industrial architecture, that is able to inspire mutually beneficial relationships between industry and nature, whilst creating a didactic and dialectical relationship between the existing industrial heritage of the past and the envisioned contemporary architecture of the future.

“It is with this frame of reference that Reneé Minnaar chose to focus on adaptive reuse principles in the historic gas works precinct in Johannesburg. She has successfully synthesised often conflicting, architectural approaches to industrial heritage through her revisions of the principles of philological restoration and regenerative architectural theory. Over and above these approaches, she has created a rich, sensitive, social and economic environment through the revival of lost manufacturing processes in the City of Gold. Through these approaches, she has repaired broken urban fabric, healed a polluted site, breathed new life into important historical relics and provided much needed educational and economic opportunities for the local inhabitants,” he said.

Pointing out that Minnaar was focussed, driven and passionate about South Africa’s historic architectural legacy, he said she would make significant contributions to architectural design approaches through her ability to sensitively interpret and then respond in a critical manner to cultural and historic architectural heritage.
“Her well-honed analytical skills will foster new approaches to the making of our built environment by building on important preceding knowledge and critically extending those approaches to existing environments that are under threat. But, more importantly, her haptic understanding of architecture will provide places and spaces of great enjoyment while her appreciation of current economic circumstances will provide architecture that will improve the livelihoods of local inhabitants,” he added.
Baker said that, through this award, Corobrik had provided a prestigious reward for Masters’ in Architecture students.

“After the many years that the competition has run, the projects rewarded by Corobrik are still revered by current students, setting benchmarks to live up to. The judging criteria and status of the judges furthers enhances the prestige and pushes students to consistently improve their design processes, intellectual rigour and presentation. The thematic foci that Corobrik have created are extremely important in guiding and assessing the relevance of architectural practice in South Africa.”

He also noted that, clay brick as a building material, had a rich architectural history which was built on by many Pretoria regionalist architects in the post-war period. “Our students are fortunate to be able to build on this legacy, together with Corobrik’s technological advances, to extend the possibilities of brick into the 21st century.”