But Building Confidence drops to below 30

The Index indicates that the majority – more than 70 per cent – of respondents are dissatisfied with prevailing business conditions.

The confidence of main building contractors fell marginally by 4 index points to register a level of 37 in 2Q2018. This is more or less in line with the growth in building activity which remained largely unchanged. Interestingly, there was some discrepancy between the performance of the two sub-sectors, residential and non-residential building, especially in terms of activity. 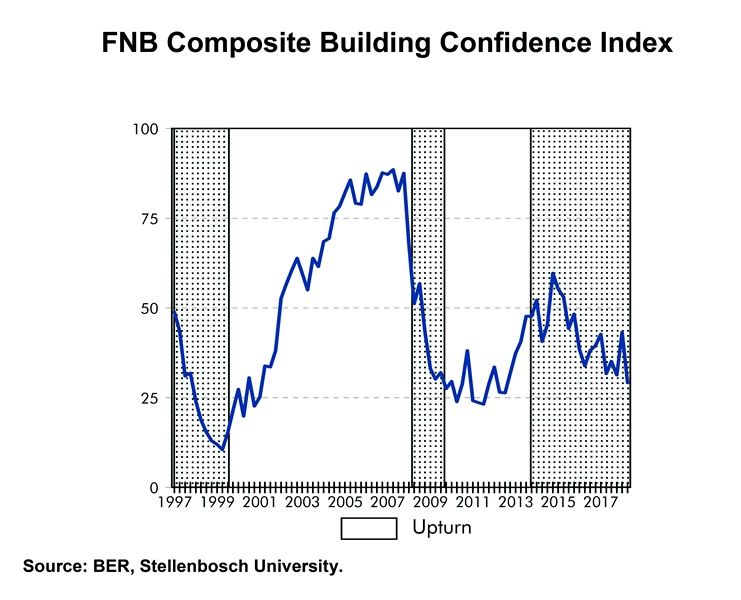 A steep 45-index point drop in the confidence of hardware retailers to 2 weighed on the overall building confidence index. According to Loos, “Sales volume growth of hardware retailers deteriorated noticeably in the quarter, contributing to the weaker sentiment. However, the fall in sales seems exaggerated given that building activity, especially among main contractors, remained more or less unchanged from the first quarter. This suggests that other factors such as constrained consumer spending or softer demand in the home renovations market may have negatively affected hardware retail sales”.

Similarly, production volumes of manufacturers of building materials were also significantly lower. This resulted in a fall in confidence to 13 index points, from 45 in 1Q2018.

Activity at the start of the building pipeline continues to produce mixed results.
The confidence of architects slipped to 40, from 43 in 1Q2018, while quantity surveyor confidence was unchanged at 31. However, quantity surveyors reported a marked uptick in activity in the quarter, albeit still relatively weak compared to recent history. According to Loos, “while these results inspire little confidence with respect to a resurgence in building activity going forward, it doesn’t suggest that the sector is entirely in the doldrums either”.

Conclusion: After rising by 12 index points in 1Q2018, the FNB/BER Building Confidence Index fell to 29 in 2Q2018. The decline was mainly due to the sharply lower confidence of hardware retailers and manufacturers of building material. Nevertheless, activity was – with the exception of main contractors and quantity surveyors – poorer in the quarter. “The continued rise in non-residential activity in 2Q2018 is heartening. However, this was offset by a noticeable fall in hardware retail sales, hardware manufacturing production, and
sub-contractor activity. This suggests slower overall growth in the building sector this quarter,” stated Loos.

The outlook is also uncertain. “The mixed results from the building pipeline suggest that if there is any upside potential for the remainder of the year, it will be limited,” said Loos.