The versatility of concrete boosts the building material’s sustainable merits and should be a decisive factor when maximum quality and longevity are aimed for in infrastructural projects, says Bryan Perrie, managing director of The Concrete Institute (TCI).

Perrie says the user or designer can basically decide what type of concrete he or she needs. “Concrete can be designed and proportioned to meet an extremely wide range of specific requirements including consistencies, flows, setting times, and hardened properties. The product is flexible enough to produce varying strengths at early or late stages, different types of strengths in general, pre-determined densities, as well as the required levels of abrasion resistance and shrinkage.”

When building with concrete, some of the many flexibility benefits include:

“Concrete has the advantage over other materials in that concrete elements such as walls, columns, beams, trusses, and slabs can be constructed in situ as part of the structure being erected, or pre-cast on site on the ground and lifted into their final position via the tilt up and stack casting methods. As a hybrid of pre-cast and in situ concrete, concrete can also be pre-cast kilometres away in a pre-cast yard and transported to site and placed into position there.

“An additional benefit is that all of the above options can be combined on one project. This may mean that some elements are constructed in situ, while others may be pre-cast on site and still other pre-cast off-site,” Perrie adds.

Dealing with the versatility of pre-cast concrete, he says this economical construction product is derived by casting concrete into a reusable mould or form which is then cured in a controlled environment, transported to the construction site to be lifted into place as opposed to standard concrete which is poured into site-specific forms and cured on site.

“By producing pre-cast concrete in a controlled environment – the so-called ‘pre-cast yard’ – it is possible to monitor and control all stages of production, including ensuring that adequate curing is carried out to ensure that the final products fully comply with strength requirements.”

Pre-cast yards may be established, operational factories or can be created on site. The pre-cast concrete is generally cast at ground level which helps with safety and productivity throughout a project. “As stated, there is greater control of the quality of materials and workmanship in a pre-cast yard than when concrete is cast in situ. Pre-cast yard production tends to lead to increased better durability and when the products and structure last longer, the end-result is cost saving in maintenance, materials and energy – not to mention eliminating inconvenience. The forms used in a pre-cast plant may be reused hundreds to thousands of times before they have to be replaced which ensures that the cost of formwork per unit is lower than for in situ construction.” 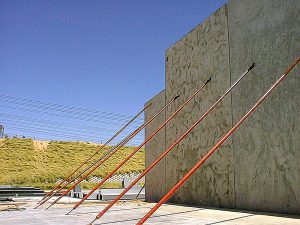 Perrie says there are many forms of pre-cast concrete products, including:

“The increased control of pre-cast concrete in the production phase ensures fewer reject products and consequent saving of raw materials, as well as speeding up construction on site. Well-situated, highly sophisticated pre-cast yards produce pre-cast products to very high tolerances resulting in significant time-savings on site. Examples of this were the pre-cast plants that manufactured the thousands of pre-cast concrete tunnel and bridge segments of the Gautrain infrastructure.”

Perrie adds: “The social contribution of concrete to civilisation cannot be overestimated. It is the second most used resource in the world after water and contributes significantly to human standard of living including the houses we live in, the schools and universities we attend, the offices we work in, the infrastructure of water reticulation and sewers, the dams that hold our water, and the roads that fulfil the needs of mankind globally.”