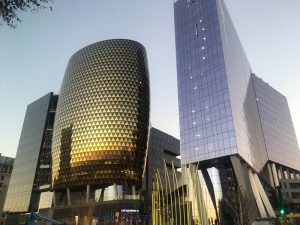 The innovative façade design of The Jewel is amongst the most spectacular architecture currently gracing the South African skyline
Photo: Geustyn & Horak

Boogertman + Partners Architects designed this unique envelope for The Jewel situated in the heart of Sandton.

This innovative façade design is amongst the most spectacular architecture currently gracing the South African skyline.

Developed by Eris, the tower called The Jewel at the new upmarket multi-use development, The MARC, has a shape and a façade like no other. Arup provided specialised façade engineering services on the project, supporting the developer, the architect and the façade contractor, Geustyn & Horak (G&H).

Matilde Tellier, senior façade engineer at Arup commented, “One of the biggest challenges with a building of such unusual geometry was rationalising the façade envelope for efficient fabrication while adhering to the architectural concept”.

The façade’s surface is formed by a mesh of 5 620 alternating gold and black flat triangular elements whose vertices follow a nebula of points scattered in space with a specific logic.

The Arup façade team approached The Jewel’s façade panellisation design by forcing the maximum number of equal triangles on the surface and exploring various combinations of curves. The goal being a smoothly curving façade with a rigorous geometric definition that enabled simplification and repeatability in fabrication of the façade components.

The shape of The Jewel façade was created in plan by generating symmetric double spirals defined by a series of tangential arcs. The arcs of each spiral are of equal length and the radius of each arc increase or decrease uniformly along the spiral. A specific combination of the chord length and the starting radius determine a unique solution for the façade in plan. To generate the façade surface, the spiral curves were swept in the vertical direction along a circular arc and the surface is panellised into triangles.

“The structural scheme for the façade was realised at a team brain storming session at one of our daily visits to our favourite coffee shop,” reveals Rudolf le Roux, senior façade engineer at Arup. “The unitised façade is composed of interlocking triangular and diamond-shaped units. In contrast to a typical unitised façade with one panel per floor height, The Jewel façade is made up of four interlocking units per floor.”

The use of parametric modelling methodology enabled the team to solve the issues that the façade contractor would have faced in producing fabrication information for the large number of unique façade panels. Arup’s team automated the positioning and end-cutting of all the aluminium frame profiles onto the 3D surface model, ensuring a high level of precision and reducing the time the contractor needed to spend on detailed modelling.

Tellier added, “We were able to accommodate and review any geometric or material changes and assess their impact almost instantaneously. The flexibility of our design process was a key factor in our contribution to The Jewel, which is much more than a building, it is a work of art”.

Arup façade team leader, Rui Rodrigues echoed this view at his keynote address at the Zak World of Façades conference held in Johannesburg in April: “The use of parametric tools allows us to define parameters of problems to explore solutions and possibly discover new ones, while assessing their effect. A parametric model, for example, could be used to grow a solution to a problem, like sun shading that grows itself on a model of a building in response to sunlight, surrounding buildings, targeting an energy performance threshold or a level of building occupant thermal comfort.”

Posted in General and tagged arup, Boogertman, facade, the marc.