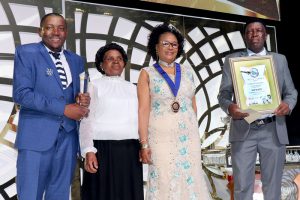 Steven Motha accepting the award for Commercial Buildings (under R50m) in 2018 alongside his mother, father and the Association’s President, Joyce Dolly Tembe

Rising from humble beginnings, Steven Siyabonga Motha was born and raised in Madadeni, a township in Newcastle. After attending Phendukani High School and matriculating in 2004, Steven went on to complete his certificate in Construction Management and then later completed a certificate in Project Management through the National Home Builders Registration Council (NHBRC).

Steven was one of 25 participants in the programme who completed the training aspect. He was allocated to a mentor, Mohammed Khan from ESE & Projects for six months in 2017. During this time, Mohammed Khan and Steven Motha discussed business goals and put a structured programme in place to achieve those goals.

When his journey with his mentor concluded, Steven entered the last phase of the programme which is “adopt-a-company”. This phase entails participants being linked to larger companies with projects underway where they gain practical exposure to on-site operations and relevant experience. This assists participants exiting the programme as they are more likely to conform to industry standards and best practice. Steven was ‘adopted’ by ESE & Projects for six months where he gained valuable industry experience. 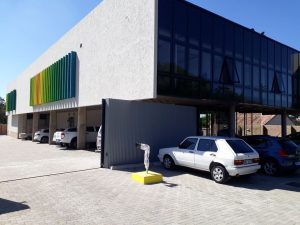 The Emerging Contractor Programme has since inception enrolled 192 delegates – 23% female and 21% youth – from across KZN including both urban and rural beneficiaries. Of the 106 delegates who have since graduated, 33% were from women-owned companies while 23,5% were youth.

Proof that hard work and determination builds a road to success, Steven’s combined skills and education led him to construct the stunning “Pre-Eminence Studio” for which he won the Excellence in Construction Award in the Commercial Buildings (under R50m) category at the Master Builders KwaZulu-Natal Annual Awards in 2018.

Steven’s progression in the construction industry is a success story of note, a story which Master Builders KwaZulu-Natal believes is still being written.