An optimised design to match a taxing contract programme was instrumental in Franki Africa’s ability to hand over the challenging foundations and lateral support work for the landmark 144 Oxford project on time.

Franki Africa was recently contracted to provide geotechnical services for the ground-breaking 144 Oxford project, a flagship 35 000 m² development by Growthpoint Properties. Located on Oxford Road in Rosebank, Johannesburg, the development is set for completion this month. When complete, the 35 000 m² development, will establish a new landmark office address in Rosebank with an innovative design that supports modern businesses to thrive and evolve.

Franki was responsible for the design, supply and installation of the earth retaining lateral support system and the piled foundations of this development. The project scope included a five-level basement to a maximum depth of 15 m below natural ground level with a total of 5 755 m² of lateral support, as well as 235 no. foundation piles with column loads varying between 3 800 and 15 000 kN.

According to Brett Markides, Senior Design Engineer at Franki Africa, from the onset, the contract programme proposed by the client proved challenging. However, the development was considered a key project for Franki, and an optimised design to match the contract programme was fundamental to winning the tender in such a competitive market.

The west elevation of the development incorporated a Gautrain servitude roughly 12 m beyond the site boundary where no structural elements of any lateral system could be installed through. The solutions to this problem were not immediately obvious as the servitude posed a restriction on the anchor lengths required for conventional lateral support. “The design team at Franki had to revert to first principles and hand calculations to conceptualise a workable solution that would account for this restriction,” explains Markides. 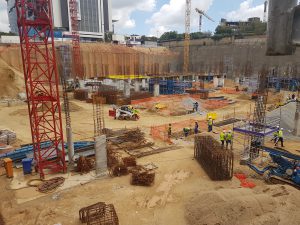 Changes in design were a constant challenge and design development had to conform to the engineers’ and clients’ specifications. In this regard, Franki relied heavily on its uniquely integral in-house design team to deal with the changes as and when they occurred, as well as providing cost-effective workable solutions to the professional teams.

“Ultimately, an innovative design solution was proposed by Franki that would meet the engineers’ specifications, and from a commercial standpoint, the programme would be achievable,” says Markides.

The design of the lateral support system on the North, East and South elevations comprised soldier piles with a system of active and passive support in the form of anchors.

“On the west elevation, an initial cut back and batter was proposed to reduce the retained height of the wall, effectively reducing the lateral forces and mitigating the requirement for structural elements extending into the Gautrain Servitude. The west elevation comprised soldier piles with a similar system of alternative active and passive support,” explains Markides.

Franki developed a fully working FEM model in Plaxis 2D, capable of staged construction analysis and analysed all expected forces in structural elements and factors of safety at all construction stages. Verification of stability and deflections in the temporary and permanent state were analysed and checked against the required specifications. The resulting output confirmed the expected modes of failure at the factor of safety stages, and the model was deemed appropriate for the design solution.

Verification of the design followed an observational approach on site through stringent monitoring to ensure predicted vs actual deflections aligned throughout construction. Accurate and up-to-date record keeping was critical to the project’s success.

Due to the innovative design process, health and safety considerations were incorporated by employing well understood and recognised methodologies in Franki, so that neither additional risk would be placed onto the site teams nor would any unfamiliar construction methodologies be introduced. “As part of the design process, an integrated risk-management analysis was undertaken to highlight any potential concerns that might arise from a technical standpoint,” says Markides.

“This was made possible with specialised cleaning tools to effectively clean the pile bases through mechanical action as opposed to cleaning the bases by hand,” concludes Markides.