RICS Africa Summit 2017: Land and Rapid Urbanisation in Sub-Saharan Africa
The slump in economic growth in Africa over the past five years has been a setback, but it should not cloud the bigger picture of a youthful continent urbanising rapidly and set to supply the global workforce of the future. The challenge of developing sprawling settlements into sustainable cities was at the heart of the 2017 Royal Institution of Chartered Surveyors (RICS) Africa Summit in Johannesburg in February. Roz Wrottesley reports:
“Be Africa-optimists!” urged the Africa Summit chair, CNBC presenter Gugulethu Cele, in her opening address to the gathering of local and international academics, practitioners in the property, construction and finance sectors and government representatives from all over sub-Saharan Africa (SSA). 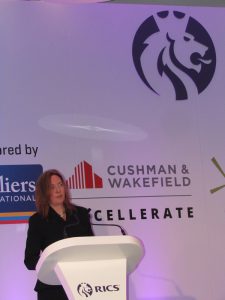 Amanda Clack RICS President and Head of Infrastructure UK, set the tone by issuing a passionate call for collaboration in the transformative journey that lies ahead for Africa – where, as one speaker pointed out, 70% of the buildings needed to accommodate half of the world’s population by 2050 have yet to be built.

Africa rising
Keynote speaker, Bennet Kpentey, Chief Executive and Managing Consultant at Sync Consult in Accra, Ghana, set the scene for an approaching African renaissance by highlighting magazine covers that demonstrate how quickly perceptions of Africa can change. In the late 1980s, Time magazine trumpeted “Africa’s Woes” and “The Agony of Africa”. A decade later, more than one cover reflected “Africa Rising”, while the austere Harvard Business Review of October 2013 provided “Seven Reasons Why Africa’s Time is Now”.

On the other hand, the “shine beyond the gloom”, he said, includes Africa’s increasing resilience to global economic crises; a growing workforce expected to number a world-leading 1.1bn in 2034; urbanisation that has overtaken India and is hot on the heels of China; rising household consumption and a burgeoning middle class – hinting at the huge market Africa will become; and an extraordinary understanding of the transformative power of technology, with smart phone ownership soaring from 2% in 2010 to 50% in 2020. 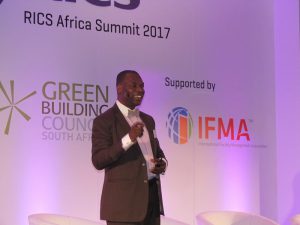 Kpentey pointed out that Africa has a tendency to defy expectations – citing the staggeringly rapid adoption of ICT (information and communications technology) and a leap in FDI (foreign direct investment) from US$10bn to US$55bn in the 15 years between 2000 and 2015. To exploit the potential of the continent, he called for strategies focused on the diversification of economies, rapid acceleration of infrastructure development, growth of manufacturing, the introduction of pro-private sector (particularly pro-SMEs) policies, and, of course, a no-tolerance approach to corruption.

Whilst Jacob Mamabolo, MEC for Infrastructure Development in Gauteng, spoke of alternatives to PPPs (public/private partnerships). His department’s policy is to approach infrastructure decisions with three priorities in mind – transformation, modernisation and re-industrialisation.

PPP is too costly for government, and his department has come up with a creative new funding mode: the “precinct model”, which entails the province making “good, serviced land” available for development and assisting investors through project management efficiencies and cost savings.

RICS aims to play a key role in the coordination of qualifications and standards in the areas of land, real estate, construction and infrastructure across Africa in the crucial decades ahead.