A view of the main table at the official opening ceremony showing the President, Mr. Briggs, delivering his annual address. This year’s Congress venue was the Orient Beach Theatre in East London, which was gaily decorated for this major event in the calendar of the Building Industry. 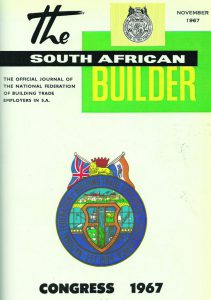 The 62nd Congress of the National Federation of Building Trade Employers in South Africa was officially opened in East London by Mr. I. F. McLean, the Rhodesian Minister of Labour ans Social Welfare, and of Health, during the last week of October.

In welcoming the Minister to Congress, the President of the N.F.B.T.E., Mr. R. A. Briggs, said this task was “a very happy privilege” for him to perform.

“Those of you who have attended Congress in recent years may be aware of the fact that an exchange of representation on these occasions has enabled our respective Federations to gain a better insight into each other’s problems and thus to establish closer relations between ourselves and our immediate neighbours in the north”, Mr. Briggs said.

In his address Mr. McLean spoke on a number of topics, amongst which was the skills shortage: “It is an unfortunate fact that, with the economies on both sides of the Limpopo each now expanding, there is insufficient number of skilled workers in all sectors of industry to meet our joint needs. I think both countries have to accept that, with the world-wide shortage of skilled personnel, neither of us can expect to meet anything like the existing demand from immigration, although Rhodesia is now also experiencing a steady and favourable balance of immigration over emigration.”

Another speaker during the opening function was, Mr. H. N. Odd, President of the East London M.B.A., who his Association had been privileged to play host to the 1967 annual congress.

“As an association which, according to history, was founded in 1903, our association played its part in the creation of the National Federation in Durban on March 23rd, 1904. We have always been extremely mindful of the very important part played by Federation, not only in so far as the Building Industry is concerned, but in the general affairs and building of this country and its nation. In this, we as an association have tried to play our part.”

“The modesty of the East London builders has never permitted them to classify themselves as one of the larger groups. This, notwithstanding, we are all convinced that East London is equipped to play an important part in our organisation and I would like to avail myself of this opportunity also to thank your association for what it has done in the past. Not only to further our national interests as an Industry, but also to provide us with national leaders.

The Mayor of East London, Councillor David Lazarus, then addressed the delegates and guests by saying that East London has developed in recent years and hoped to develop further in the years ahead.

“A recent development which merited applause and congratulation was the recent publication of a Handbook on Careers in the Building Industry, which was the first book of its kind to be produced for use by vocational guidance officers in South African schools.

The official opening ceremony was completed by Mr. T. Pattullo (a past President of the N.F.B.T.E.,) thanking Mr. Briggs for his year of office.

Association delegations represented at this year’s Congress were as follows: 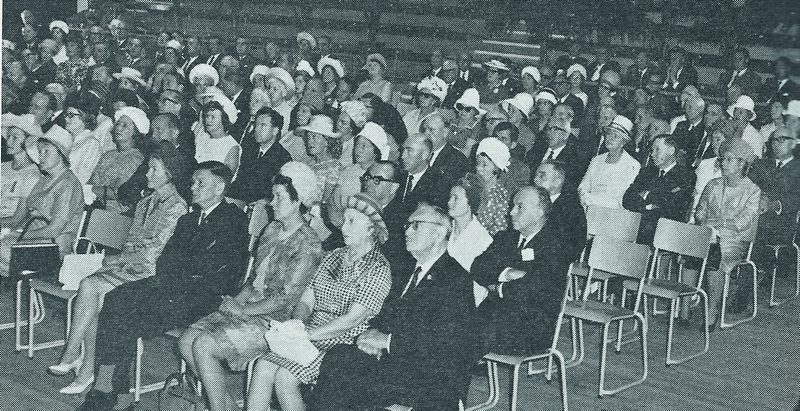 A section of the large crowd of delegates, their wives and guests who attended the official opening of the 1967 Annual Congress. Mr. J. C. Bitcon, a past President of the N.F.B.T.E., is shown sitting at the end of the front row with Mrs. Bitcon on his right.

Posted in MBA and MBSA news and tagged MBSA Congress 2017.