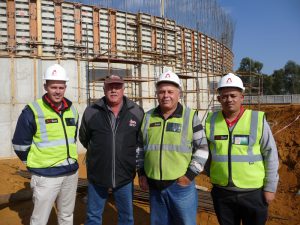 Gauteng continues to be an urban magnet drawing job seekers from far and wide, making the Droogheuwel municipal bulk water reservoir in Randfontein a vital piece of infrastructure to keep sufficient water flowing to the growing area of Randgate.

Hard at work on this 20 megalitre reservoir is the Stilfontein-based contractor Ultimate Dynamic, supported with concrete from construction materials leader AfriSam. The project is due for completion in March 2018.

According to Pieter van der Merwe, Ultimate Dynamic’s project manager, the 47,6 metre diameter structure, with a wall thickness of 500 mm, will require about 2,000 cubic metres of water-tight pump-mix concrete with a strength of 40 MPa.

“After the contract was awarded in December 2016, we started preparation on site in January and were ready for our first concrete pour in April,” says Van der Merwe. “We are now about a third of the way to completion, and are busy on the third lift (or level) of the reservoir wall, which will require eight lifts to take it to the required height of almost 13 metres.”

Readymix is being delivered from AfriSam’s Technikon plant in its six cubic metre capacity trucks, with each pour comprising about 60 cubic metres – or ten trucks of readymix. Concrete is raised and deposited into the formwork moulds by a truck-mounted boom pump with a reach of over 40 metres, according to AfriSam production team leader Mark Wernich.

“We currently deliver on average once every seven working days, and our plant is conveniently located less than 25 km from site,” says Wernich. “Our production capacity and specialised equipment will also allow a continuous pour of about 380 cubic metres for the roof of the reservoir, once the walls are completed toward the end of the year.”

Van der Merwe says the project covers the reinforced concrete construction of the reservoir walls and roof, as well as all pipes, valves, access manhole doors and step ladders. It also includes the inlet and outlet chambers for the reservoir, pump rooms and the access road from the existing tar road nearby.

“It has been a smooth operation working with AfriSam,” he says. “We place our site orders with Ultimate Dynamics head office, which contacts the AfriSam call centre. The concrete is then dispatched from the plant in Technikon in Roodepoort, and it has all proceeded like clockwork.”

He highlights the value of AfriSam’s quality control function, which includes taking their own concrete tests on site with every delivery, ensuring that the correct strength of concrete has found its way into the structure.

“It is vital that tests are conducted on every batch, and the results carefully recorded, so that our client can be assured of the integrity of the work,” says Van der Merwe. “With a major structure like this, holding such a large volume of water, there needs to be great attention to every detail.”

Wernich says that AfriSam’s quality systems are a key element of its offering to customers.

“Even when our customers do their own testing, we also test and keep records that they can refer back to if there is ever any query about any particular batch of readymix delivered,” he says. “AfriSam’s plant laboratories – based at our cement, aggregate and readymix operations – ensure ongoing process control testing on all our products.”

Once the Droogheuwel reservoir is complete, the pipeline to feed the new reservoir will be laid over a distance of about seven kilometres through the town of Randfontein, linking it to an inlet pump station on one of Rand Water’s main lines. Water from the reservoir will then be pumped from the outlet chamber on site to the pressure tower about two kilometres away, from where it can enter the reticulation system serving the surrounding area.

Posted in Cement and concrete and tagged afrisam.