In this exclusive article SA Builder delves into sustainability in cement production: 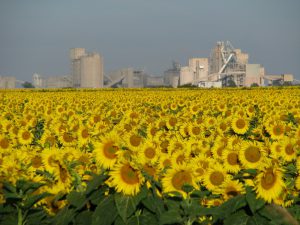 AfriSam’s Dudfield cement plant near Lichtenburg in the North-West province has its roots dating back to 1949 and remains a vital pillar in South Africa’s construction sector.

Vishal Aniruth, general manager at AfriSam Dudfield, notes that the plant had seen a number of production upgrades over its life-time. As importantly, it had been at the leading edge of efforts to achieve environmental sustainability.

“We were one of the first plants in the country to convert from old electrostatic precipitator technology in terms of air emissions control,” Aniruth said. “This involved the installation of bag-house filter technology for kiln emissions, and allowed us to achieve compliance with the latest emissions standards.”

The Dudfield facility began as a mining operation, exploiting the shallow calcrete deposit that covers the entire 3 608 hectare mining licence. Before the plant was built, the mined limestone was shipped to the company’s kilns in Roodepoort.

Today, the quarry is a split-bench operation that opens up about 15 hectares a year. It produces annually about two million tonnes of limestone and 120 000 tons of shale for the plant from the Spring Valley quarry, located 65 km away.

Aniruth highlighted that the latest computer-based modelling techniques are used for deposit optimisation. This ensures that the mine plan generates the required quality of material for the plant. He noted that there are 65 years of proven reserves at the quarry, with further reserves at AfriSam properties at Kalkfontein and on the neighbouring farm Bethlehem. 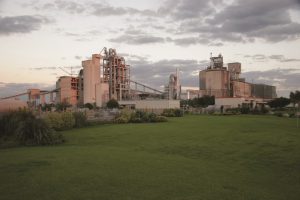 The cement plant itself was commissioned in 1965, with one kiln with the capacity to produce 380 000 tonnes per year. Kiln 2 followed in 1972, with an annual production capacity upgraded over time to 780 000 tons. The plant grew further in 1977, when Kiln 3 was added, augmenting capacity by another 630 000 tonnes a year. In an important market-leading innovation in 1992, Dudfield installed the country’s first cement roller press to enhance the manufacturing process and improve grinding capacity.

Continuously aligning its production capacity with market demand, AfriSam Dudfield upgraded its Kiln 3 capacity in 2003 to over a million tonnes a year. The plant currently operates only the Kiln 3 production line – a four-stage configuration with in-line pre-calciner. The kiln features indirect firing with a multi-channel burner.

Among the key elements of current plant operations at Dudfield are two coal mills and two cement mills. Coal mill 1, constructed in 1966 with production capacity of 11 tonnes an hour, feeds the pre-calciner burner. The other unit mills coal for the main burner, and was built in 1975 with a 16 ton per hour capacity. Cement mill 1, installed in 1966, has a 49 ton per hour capacity. The second cement mill is larger, giving it double the capacity at 98 tonnes an hour.

The cement output from Dudfield is delivered as road bulk, rail bulk and bagged cement. The plant’s in-house road bulk and weighbridge facility is used to load tankers. On the rail bulk operation, a large portion of the plant’s production is railed to AfriSam depots. Clinker is also supplied to AfriSam’s Roodepoort milling facility. The packing and palletising facility produces a bagged cement product for the market.

Dudfield is one of two fully integrated AfriSam cement plants in South Africa, which together can produce 4,5 million tons of cement. The second is the Ulco plant in the Northern Cape. The company’s third plant – with annual capacity of 1,2 million tons – is in Tanzania. 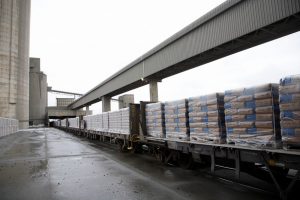 The cement output from Dudfield is delivered as road bulk, rail bulk and bagged cement

Also addressing the media visit to Dudfield was Hannes Meyer, cementitious executive at AfriSam, who focused on the company’s commitment to environmental issues. He noted that the global cement industry was responsible for about 5% of the world’s greenhouse gases released into the atmosphere. The country was also a significant producer of CO2 emissions.

“South Africa is one of the world’s largest and fastest-growing carbon emitters,” said Meyer. “We are in the global top ten of CO2 emitters, when measured per capita.”

As a result, the country had committed to reduce greenhouse gas emissions by 34% below its ‘business as usual’ levels by 2020. As cement manufacturing produces a high level of CO2, he said, AfriSam had been proactive since the 1990s in charting and implementing a path towards environmental sustainability.

The innovative step in 2006 to install a baghouse in Dudfield’s Kiln 2 line was part of a broader corporate strategy, built on the values of ‘people, planet and performance’. AfriSam’s value of ‘planet’ is defined as a responsibility for the impact of its actions on the community and the environment.

“We were the first company to equip all our kilns with the latest bag filter technology,” he said. “As a company, we are committed to make a difference and to leave a legacy that is positive.”

These initiatives have reduced the company’s particulate emissions to less than a tenth of what they were in 2003. It has also brought emissions to below even the European standard of 30 mg/m3; local regulations require 50 mg/m3 or less. 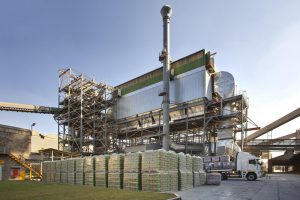 Overall, the progress achieved in controlling its plant emissions and making production facilities more energy efficient has had considerable impact on AfriSam’s environmental performance. Between 1990 and the present, its CO2 emissions per ton of cementitious material have been reduced by 35%.

The use of extenders in cement has been an important aspect of these efforts. In 2000, the company launched Project Green Cement – to increase the use of extenders like fly-ash and slag from other industries. This allows the reduced use of clinker – the main consumer of energy in the production process – while making more use of extenders.

“We are probably South Africa’s leading company in our understanding and application of extenders in cement,” said Meyer. “This field holds considerable scope for creating more environmentally friendly cements. We are pleased that we have developed the technical expertise to do this.”

In 2009, AfriSam was the first in the industry to introduce a CO2 rating system. This indicates the carbon footprint of each of its cement products, relative to Ordinary Portland Cement (OPC). Indeed, the initiative has gone beyond cement manufacture. Even AfriSam’s other construction materials – aggregate and ready mix concrete – receive a carbon footprint rating. This may also be an industry first, argued Meyer.

The carbon tax recently introduced in June 2019 will be another pressure for many South African CO2-producing sectors, but also brings opportunities, he said.

“There are many good concepts that industry has developed to save energy and CO2 emissions, but the depressed economy has dampened their application,” he said. “Carbon tax revenues could be channelled into incentives that promote energy-saving innovation, with good effect. This would ease demand on Eskom’s grid, contribute toward the country’s Paris Agreement obligations, and make our industries more competitive.”

The company’s environmental efforts include the maintenance of a dedicated Nature Conservation Trust for the full rehabilitation of quarries and mining areas after the closure of operations. It also includes collaboration and support for important players in the conservation space such as the World Wildlife Trust and Cape Nature.