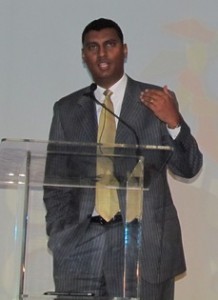 The South African Institution of Civil Engineering (SAICE) looked forward to the 2016 State of the Nation address in the expectation that President Zuma would clarify the past five years’ announcements of more than R800 billion of infrastructure projects to be rolled out over three years. This had not transpired; in fact, there was no direct mention of infrastructure development or maintenance of existing infrastructure assets.

Manglin Pillay, CEO of SAICE, explains: ”In the global economy, the state of a nation’s physical infrastructure provides one of the best indicators of its likely prosperity. Profitable economic activity requires efficient and functioning systems of transport, energy, water and waste water management and social infrastructural services.” Insufficient focus on infrastructure development, maintenance and operation detracts from the fact that, according to Pillay, “The civil engineering and construction sector is the third highest employer of all sectors in South Africa.” Various indicators show that the civil engineering and construction industry is in depression, which is ironic, as it has the ability to attract international and national investment, can create job opportunities and, perhaps most importantly, can deliver much-needed services to communities – in line with the National Development Plan (NDP). The industry needs these projects to be rolled out.

Furthermore, civil engineering is the second scarcest skill in the country. Yet in the past year hundreds of civil engineering professionals have lost their jobs from some of our largest civil engineering and construction companies, and continue to do so. South Africa cannot afford to lose these highly skilled civil engineers because government cannot get its act together to roll out the envisaged NDP infrastructure projects.

If infrastructure development, which is at the heart of the NDP, is not mentioned, including unannounced municipal visits, spot checks of supply chain management processes, one wonders what will happen to the very large number of municipalities that do not even have any civil engineering practitioners in its employ? Who will take responsibility for the infrastructure in disrepair, communities struggling to get water, not even mentioning sanitation and waste management services? Who will be held accountable for tarred roads deteriorating into gravel roads? Who will be able to stop the increasing protests just to receive the basics as set out in our Constitution?

In September 2014 at the Presidential Local Government Summit, President Zuma said that he wanted an action plan for service delivery. SAICE salutes what government has done in providing water to more than 11 million people since 1994. The fact is, however, that many of those who have indeed received water, are now protesting because of a lack of, or inadequate service delivery due to infrastructure disrepair resulting from inadequate maintenance or inefficient construction practises.

Cooperative Governance and Traditional Affairs Minister at the time, Pravin Gordhan, urged municipalities to only hire engineers and technicians who will construct the best infrastructure developments that will last for more than 20 years. He added that municipalities should maintain infrastructure timeously and properly to enable state properties to stand the test of time. He also said, “Our motto should be: No service failure.” If the Auditor-General’s audits are anything to go by, service delivery is very close to being a national crisis.

At the first Civilution Congress in 2014, organised by the Civilution Forum, many of these issues were discussed in depth with among others, government representatives. At the event SAICE invited national and provincial ministers to engage with the Institution to find solutions. The next Civilution Congress will be held on 9 and 10 May 2016 at Gallagher Estate in Midrand.

In conclusion, this year’s SONA address does not encourage infrastructure investment, as government itself is not investing adequately in civil engineering infrastructure for the future. SAICE repeats its invitation to engage government to find solutions, especially regarding the re-professionalising of the Departments of Water and Sanitation, Public Works and the many municipalities in need of adequately qualified civil engineering practitioners, to ensure effective service delivery.