News from the East Cape MBA of regional dinners, AGMs and social activities

April, May and June are undoubtedly the busiest months of the year in the East Cape Master Builders Association (East Cape MBA) calendar.

This is when the Association holds its regional dinners and AGMs – at which office-bearers are elected and inaugurated; it is also a time during which auditing and judging of entries for the Regional Safety Competition reaches its peak; and a number of social activities such as golf days and annual dinners kick of in the various regions.

At the time of writing a number of these activities have successfully completed, thanks to the continued efforts of the slick East Cape MBA team, whilst some events are scheduled to take place during June through to September. 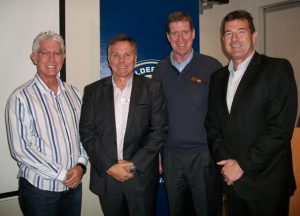 Southern Cape Branch
In George, at the AGM of the Southern Cape Branch of the East Cape MBA, Sheldon Bubanj and Brad Stockigt were re-elected as Chairman and Vice Chairman respectively. Blenheim Insurance Administrators provided the venue and catering for the event. 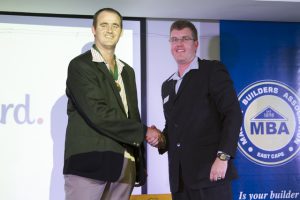 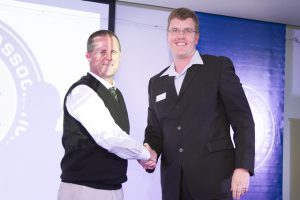 Queenstown Branch
The MBA hosted its first regional Annual Dinner for the year in Queenstown in May. With Gino Fabbri as the entertainer. A memorable evening filled with laughter was enjoyed by all. Congratulations to Tim van Oosten and Greg Pohlmann who were inducted as Chairman and Vice-Chairman respectively of the Queenstown Branch having been elected at the Queenstown General Meeting earlier in the year. 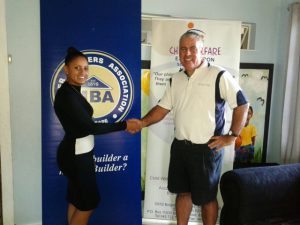 Martin Van Seumeren of East Cape MBA (right) hands over a cheque to Lauren Harmse (left) of the Sunshine Children’s Home. This was made possible through funds accumulated from the proceeds of the East London MBA Golf Day.

East London Branch
In May the MBA had the privilege of handing over a cheque to Sunshine Children’s Home in East London. This was made possible as a result of funds accumulated from the proceeds of the East London MBA Golf Day held at the East London Golf Club in April. 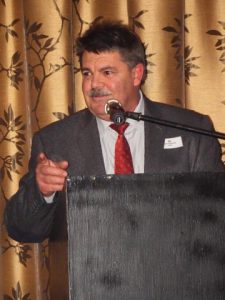 Grahamstown Branch
The next Annual Dinner to take place will be in the Grahamstown region on the 9 June with Gavin Sharples as guest and motivational speaker.

Further Annual Dinners will be taking place in George, East London and Port Elizabeth where well renowned funny man Barry Hilton is sure to lift the spirits of an otherwise concerned industry.

The East Cape MBA and its regional branches extend their sincere thanks to all of the sponsors for these various events.
On construction in the East Cape Region:
The East Cape MBA notes with great concern that the regular report on private sector building statistics for the region reflects a significant drop in both building plans passed and buildings completed.

The East Cape has in recent years enjoyed a steady stream of notable projects in the region and it is hoped that this upbeat trend returns in the months ahead.