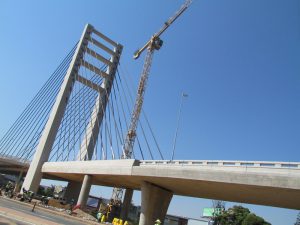 The bus rapid transit (BRT) Rea Vaya bridge linking Alexandra and Sandton was completed on schedule in April.
Engineering consultancy firms Hatch, Royal HaskoningDHV and Malani Padayachee and Associates undertook the design and planning of the project, which was funded by the Johannesburg Development Agency.
Hatch was also responsible for all procurement functions as well as construction of the project.
Photo: John Thomé

Consulting Engineers South Africa (CESA) – the industry association for consulting engineers, representing a member base of over 500 companies which employ over 23000 people in various capacities – delivered the following statement in April:

“CESA is dismayed by the current cabinet reshuffle. As an industry we pride ourselves on excellence in the delivery of infrastructure projects.

The current cabinet reshuffle, which we accept as being the prerogative of the President, regrettably not only runs the risk of exacerbating the already troubled economic situation we find ourselves in, but also sends out a disturbing message on rewarding mediocrity and punishing excellence. The latter is counter-intuitive to the culture we seek to establish among young engineering professionals who will be responsible for ensuring the well-being of our infrastructure for generations to come.

CESA further would like to reiterate that the country cannot afford this questionable reshuffle based on the need for more “effectiveness and efficiency” according to the President, when this flies in the face of dispensing of the very performance needed to achieve this objective. As engineers we believe that a better approach would have been to dispense of the non-performers and bring on board more performers.

The industry is already experiencing difficulty amidst corruption, appointment of consulting engineering firms that have little or no track record of delivery and even mafia style criminal activity halting construction activity. The latter not only puts lives at risk but also affects job security in a sector where limited employment opportunities currently exist due to the already low levels of capital investment in infrastructure.

The junk status downgrade investment rating by Standard & Poor’s, a leading global credit rating agency, which emanated mostly from the political uncertainty confirmed by this ill-timed reshuffle, limits investor confidence further and will not only hamper economic growth, but will further limit our ability to create more jobs. Skilled engineering practitioners from various technical disciplines are currently being retrenched at a time when this has been identified as at least six out of the ten most scarce skills in the country.

The jury of course is always out on whether new appointees will be future star performers and whether some Ministers would have learnt from their past shortcomings. As an industry committed to the success and well-being of our country, in support of initiatives towards constructive and sustainable economic transformation, we offer our support to partner with those ministries entrusted with infrastructure delivery.

We, like all other citizens are committed to a South Africa that benefits all, in the present and for generations to come.“

Posted in General and tagged cesa.