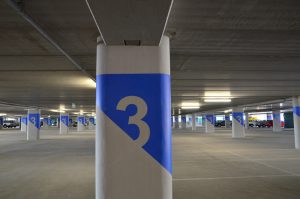 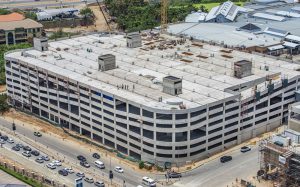 Comprising seven storeys and a total floor area of 65 000 m², North East Parkade is also SA’s largest precast concrete structure to date and was built as part of the expansion and revamp of the Fourways Shopping Mall in Johannesburg.

In making the award, the panel of judges commented that the project has broken the mould for the design and construction of parking structures and is an example of efficient, streamlined engineering. 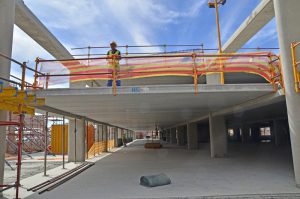 Various sections of the parkade under construction

North East Parkade was initially conventionally designed using cast in-situ technology. However, time constraints and a need to minimise disruption to traders and their customers were important design considerations. This prompted the design team to investigate and to then propose an alternative design using precast columns, beams and slabs as the frame’s main structural elements. Together with other precast elements such as crash barriers/balustrades and stairs, they would be combined with cast-in-situ concrete, to create a hybrid construction system.

Besides being faster and causing less disruption to retail activity, precast construction would be propless and would allow the early occupation of the lower floors while the upper levels were still under construction. Moreover, its fast, repetitive modular construction technique and consistent factory-produced quality would yield superior productivity and improved safety on site.

Echo Prestress manufactured 78 000 m² of slab material which was used for the flooring and retaining walls. Echo was also the prime mover in the switch from in-situ to precast construction and played a major role in the precast engineering, input which was crucial to the success of the project.

According to Echo Technical Director, Daniel Petrov, hidden column and beam connections were critical in complying with the architectural design criteria and these had the added advantage of simplifying the installation process.

“Vertical load transfers up to 900 t/column were facilitated by purpose-designed connector bolts and shoes which enabled the columns to be simply bolted together. The columns were cast in two-storey lengths to minimise the number of joints. As soon as the columns were secured in position, rectangular beams were seated on steel billets which had been cast into the columns. Thereafter, the placement of the slabs onto the beams could follow immediately,” said Petrov.

Only 475 mm deep, the shallow beams were designed to suit the restricted 3 060 mm floor-to-floor height. A floor screed was applied as a structural component and enhanced the stiffness of the beams by more than 200%. During load testing under a live-load application this resulted in deflections of not more than 2 mm on a 7 850 mm beam span.

The detailed structural design was carried out by Precast Concrete Consultants, (Precon) who utilised specialised software for the creation of construction of construction drawings. This resulted in fabrication drawings being made available as part of the specialist design process and further reduced the complete project time cycle. Close cooperation between Precon and the overall project engineers, WSP, ensured that all structural details were well coordinated and complied with WSP’s requirements.

“With the advances in construction technology and techniques available today, precast structures of this type will become indistinguishable from those constructed using non-precast methods. Designers are no longer obliged to work within tight constraints. Due to the availability of an increasing number of precast elements they are now able to incorporate increasing variety and design complexity in their buildings.

“The North East parkade is a functional and aesthetically pleasing end product which will surely be classified as one of South Africa’s ground-breaking structural applications.

“The true value of this flagship project is yet to be fully realised and it should promote greater liaison between the precast producer and the design team. However, it already represents a significant shift towards prefabricated construction methodology and is encouraging construction professionals to take a fresh look at the benefits of precast.

“Educating the current and upcoming generation of young professionals in the correct use and appreciation of precast construction is one of our primary objectives as professionals and North East Parkade will provide a valuable reference point for South African professionals and educators who are involved and/or considering similar projects.

“Moreover, continuous investment and innovation by the South African precast concrete industry will pave the way for ever more complex layouts and external treatments,” concluded Petrov.