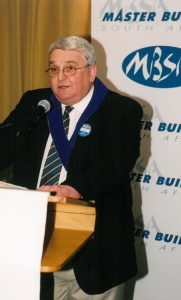 It is with deep regret that Master Builders South Africa bids farewell to Past President of the (then) Building Industries Federation of South Africa (BIFSA), Bennie Botha, who passed away last month.

Bennie served as President of BIFSA during 2003/2004 and will be well remembered for his contributions to the BIFSA Centenary celebrations in March 2004, as well as the preparations leading up to the name change to Master Builders South Africa later in the same year.

To quote Bennie at the time:
“I have absolute confidence that our industry will continue to grow throughout the 21st century and will continue to be a major factor in the development of our country’s economic welfare.  The men and women who actively participate in this industry today have the same uncompromising steel-willed spirit and belief in their ability to succeed at all costs and in the fact of adversity.”

Benjamin Adam Botha was born in Pretoria in 1944. Having been in the construction industry since 1963, Bennie founded B A Botha, Builder & Contractor in 1967, specialising in house building and alterations. After successfully negotiating work in Plettenberg Bay, he moved there in 1968.

Bennie was an active member of the East Cape Master Builders Association and served as President of the Association in 2000 and 2001. He was elected to the BIFSA executive in 1988.

He also served on various MBA and Bargaining Council committees.

Bennie’s sharp mind and great sense of humour will be sadly missed.

Posted in General and tagged botha, obituary, past president.