Safcec has sent an SOS to government and demanded urgent intervention to halt the so-called “construction mafia”. 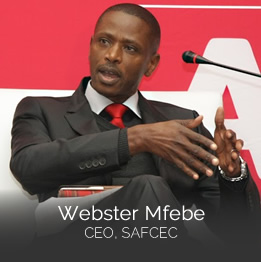 The SA Forum of Civil Engineering Contractors of South Africa (Safcec) has sent a SOS to government and demanded urgent intervention at the highest government level to halt a series of attacks on construction projects by AK-47 wielding thugs who are part of the so-called “construction mafia”.

Webster Mfebe, the chief executive of Safcec, an industry body representing JSE listed, non-listed and emerging contractors, said today (wed) these gangs had to date disrupted and halted at least 78 projects worth a minimum of R25.5 billion.

Mfebe said the industry was gravely concerned about this situation and the harm it caused to investor confidence in South Africa’s economy.

He said these disruptions had already resulted in at least 110 engineers and other highly skilled technical personnel leaving the country largely, with many others on the verge of leaving, due to these incidents because of the personal risk to their lives and the lack of work because of projects being disrupted at gunpoint.

Mfebe provided a list of the names and skills of 110 engineers and skilled technical people who had already left the country. 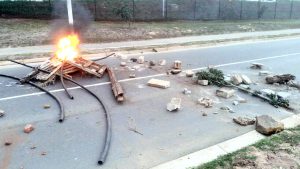 He said the loss to the country of these key skills would create a serious capacity problem for the construction industry in South Africa.

The letters follow the latest incident a week ago when armed gangs attacked the R2.4bn German oil storage investment project being built by WBHO Construction in Saldanha in Western Cape and demanded to be part of the project.

Mfebe said the attack resulted in the site “resembling a war zone and the project being halted because of property and plant being set alight and burnt down.

Mfebe said police arrived quickly on the scene but said there was nothing they could do as only the public order police from Paarl could handle the situation and it took them three hours to arrive while local police and contractors watched on as property was burnt to ashes.

“Contractors, including female engineers and staff, had to run for their lives into the veld,” he said.

Mfebe was aghast that such an incident could take place in South Africa, which made the project site look like a war zone in Afghanistan or Iran, without any comment from the South African government.

He said this incident followed the termination by the Aveng and European-based Strabag International joint venture of the R1.5bn SA National Roads Agency (Sanral) Mtentu Bridge Project in the Eastern Cape due to site disruptions by armed gangs demanding to be part of the project.

“Despite reporting it to the police and interdicts obtained, the disruptors were released after being arrested and continued disrupting the sites unabated with AK 47 rifles,” he said.

Mfebe also cited an incident that took place in KwaZulu-Natal in 2016 when the black owner of a construction company was accosted at gunpoint by the disruptors demanding a stake in the project he had been awarded.

“When he refused, he was killed in cold blood. The KZN police are aware of the incident.

“Despite the perpetrators being known to the police, to date no arrests have been made,” he said.

Mfebe said this incident was indicative of the fact that contractors of all sizes were adversely affected by “this gruesome phenomenon”.

He added that despite contractors being faced with this situation, which was beyond their control, and having laid charges at police stations and in most cases obtaining court interdicts against the disruptors, public sector client departments, such as Sanral, like “continue to mete out heavy penalties against contractors for standing time.

Mfebe said this was driving these companies to the brink of bankruptcy, adding some had already entered business rescue and were shedding more jobs.

“We hereby humbly request an urgent Cabinet pronouncement and action on these matters as the Rule of Law needs to be maintained at all times in order not to scare off investors in the sector.

“We further request an urgent meeting with captains of construction industry to discuss this emergency, including lack of work and non-payment of contractors (for completed and certified work) by public sector client departments, which issues go against the President’s statement [on September 21 2018] that: ‘The stimulus and recovery plan prioritises infrastructure spending as a critical driver of economic activity’.”