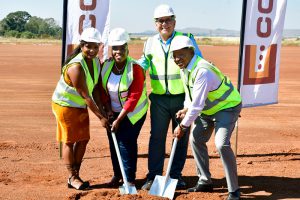 Pictured at the sod turning of the new Corobrik factory at Driefontein is from left to right Lerato Mokgotsi, Rehab Mathobela Corobrik Directors, Peter du Trevou Corobrik Chairman with Bryan Soldaat, Director: Resources Based Industries for the Department of Trade and Industry.

Corobrik, South Africa’s leading brick maker, is making steady progress in the construction of its R801-million new Driefontein factory and expects to see the first bricks exit kiln one of two kilns in March next year.

Speaking at an event held at the new factory building at Driefontein and attended by Minister of Trade and Industry, Rob Davies, chief executive of Corobrik Dirk Meyer said that Corobrik would commission Africa’s largest and most environmentally friendly brick factory by September 2020.

“We are committed to South Africa and believe that it is just a matter of time before the construction sector improves. The construction industry and the associated brick industry has traditionally been and still is, cyclical. Corobrik has always invested strategically at the bottom of the cycle in order to be better prepared to reap the rewards of an upturn.” he said.

Meyer said that the driving force behind investment in this exciting facility was to increase production whilst reducing costs. The implementation of the best technology available worldwide would ensure that Corobrik remained a world-class superior quality producer. 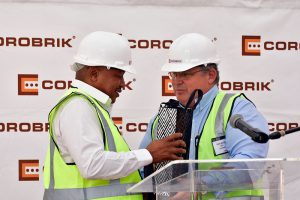 Dirk Meyer, chief executive of Corobrik presents to Bryan Soldaat, Director: Resources Based Industries for the Department of Trade and Industry

The new Driefontein facility, which is expected to produce 100 million bricks per year, will meet larger volume orders for major construction and infrastructure projects while the company’s existing 13 clay brick factories and 14 kilns which produce a mix of plaster and face bricks for the residential and commercial markets, will meet smaller orders, he added. 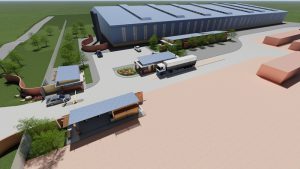 Corobrik currently sells about four million bricks per working day. Construction of the new facility began in July last year. Construction is expected to be completed by the end of 2019.

Approximately 200 employees are on site each day during construction with a total of 323 000-man-hours recorded so far, he noted.

Minister Rob Davies congratulated Corobrik on progress so far. He said the company was well positioned to take full advantage of increased demand for building materials as the many new manufacturing facilities that had been announced by investors in response to government’s drive to attract both local and foreign investment began to take shape. 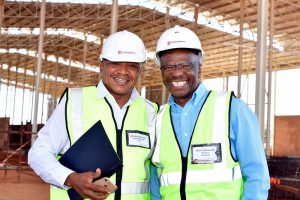 He also welcomed the fact that the construction of the new Driefontein facility would have a positive impact on the neighbouring community.

“The new Driefontein factory will use considerably less energy than the adjacent older facility.

It will fire bricks at an average natural gas consumption at less than 40% of the current facility consumption.”

30 people from the local community and family members of the current staff have completed a 12-week bricklaying course. The main contractor will employ these newly trained bricklayers for the duration of construction.

Corobrik does not intend to shut down the older Driefontein factory, Meyer said they were exploring the feasibility of running both production facilities by introducing new product offerings in the market. 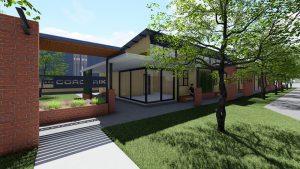 The new plant will create around 60 jobs in the factory and will require at least 800 bricklayers to bring in the bricks that are produced and sold.

It would also be necessary to upgrade existing skills needed to operate the state-of-the-art technology factory.

“When recruiting staff for the new factory, preference will be given to existing employees who will be trained on the new equipment as they have the advantage that they understand the brick making process,” he said. This will create vacancies and job opportunities elsewhere in the business.

All surface water will be channelled into one of the existing quarry dams and then reused as process water. A new effluent treatment plant will also be constructed.

Photovoltaic panels will be installed on the north facing roof to convert solar energy into AC power and act as a grid tie in system to supplement Eskom supply during the day. It is estimated that the electrical energy produced will be approximately 10% of the factory’s daytime electrical power requirement.