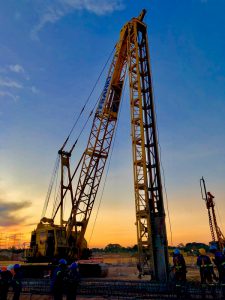 An ambitious project timeline for the construction of Cervejas de Mozambique’s new brewery, compounded by a late start to the project due to external constraints, saw geotechnical specialist Franki pull out all the stops to ensure partial handovers of the foundations and lateral support to allow the main contractor to carry on with the works. 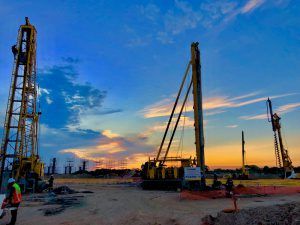 Franki piling while the sun goes down in Marracuene. From left to right: Ajax Crane with leader, Franki Crawler Rig and Casagrande CFA 26.

Franki Africa is once again proving why it is the largest, oldest and most established specialist geotechnical contractor in sub-Saharan Africa. This time, the contractor is calling on its experience in this specialist field to get the better of an array of challenges at the construction of a new brewery in Mozambique. The project owner, Cervejas de Mozambique (CDM), which already owns three breweries in the country, is a subsidiary of the largest global beer brewer, AB InBev.

Having broken ground on the construction of a more than 2-million hectolitre a year brewery to be built at a total cost of US$180-million in Mozambique’s Marracuene district, about 30 km north of Maputo, CDM went on to lay the first stone for the construction of the new brewery in early December last year. The project is the largest investment by CDM and by the beer sector at large in Mozambique since CDM’s inception back in 1995. 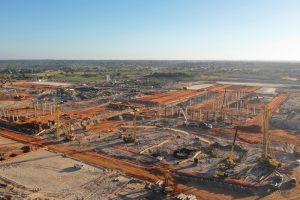 The new brewery, scheduled to produce its first batch of beers by the end of this year, means that its construction has a very tight timeline. Franki has been entrusted to carry out geotechnical work on the project. Marta Botelho, Contracts Engineer at Franki Mozambique, explains that Franki is responsible for the installation of foundation and lateral support piling for different structures of the brewery, like the BBT Tanks and Unitanks, Raw Material Silos, Malt Intake and Mill House.

With an initial estimated duration of five weeks, Franki’s project duration has since been extended to 10 weeks. As a result, the contract value has increased from MZN79-million (about R21,5-million) to MZN129-million (about R35,1-million) due to additional works required. A late start to the project meant a major setback to the project’s stringent timeline. 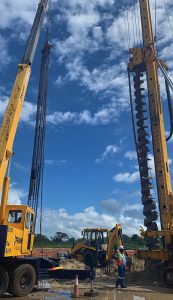 Apart from the late start, Botelho says the tight nature of the timeline was just a big challenge from the start, adding that the programme is very tight, due to the client’s plans to start operations this year.

“After a late start, we managed to guarantee partial handovers of the different areas in order to allow the main contractor to carry on with the works,” says Botelho. “Our design team worked together with the client’s engineers (WSP) to get to the best solutions and overcome any arising challenges.”

Another key challenge the Franki team had to contend with was the short supply of readymix concrete. There is a long distance from an existing batch plant to the site. “We used different suppliers and our own concrete transit mixers to minimise this challenge. Due to the tight nature of the programme, we also had to resort to working extended hours,” says Botelho.

With a total of 60 people on site, including 18 subcontractors for steel fixing, Franki’s project scope encompasses different piling technologies, including the Continuous Flight Auger (CFA) piles and the Driven Cast-in-situ piles, also known as Franki Piles, with diameters ranging from 410 to 800 mm. Franki will install a total of 707 piles, comprising 142 no. CFA and 367 no. DCIS foundation piles, as well as 81 no. Grout Columns, 117 no. CFA piles and 243 m² of Gunite arches in lateral support. 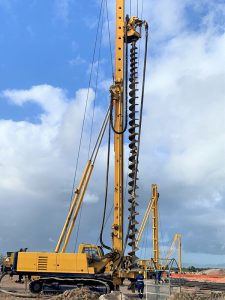 Franki with all their “ducks in a row”

Commenting on the choice of piles, Botelho says CFA piling is a fast system with no vibration and limited noise levels associated with it. Franki Piles, on the other hand, are the most economical and reliable piling system in southern Africa. Developed about 70 years ago, the Franki Pile’s main feature is the large base formed at the toe of the pile and, in forming it, the end-bearing area is considerably increased. Generally a very economical system, it has an extensive range of pile sizes.

To execute the project, Franki has a range of equipment for each of the setups. For the CFA setup, the geotechnical contractor has deployed the Casagrande CFA-26 auger rig and the Sany HBT-40 concrete pump. A Franki Rig SA83 and a 60t Ajax C60 are being utilised for DCIS setup. In terms of auxiliary equipment, Franki has deployed a Tadano TI mobile crane, the two Fiori transit mixers and two TLBs. “For lateral support equipment, we have on site a Comaachio Geo 305 drill rig and a single Mat Pump. Proper selection of equipment is very crucial to ensure timely delivery of the project,” concludes Botelho.