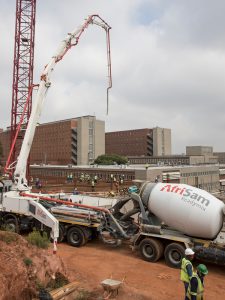 Johannesburg will soon boast one of the most modern forensic pathology laboratories in the southern hemisphere, with work proceeding apace alongside the Helen Joseph public hospital near Auckland Park. Construction is being undertaken by black-owned contractor Maziya General Services, partnering with construction materials leader AfriSam for its supply of readymix concrete and bagged cement

Johannesburg will soon boast one of the most modern forensic pathology laboratories in the southern hemisphere, with work proceeding apace alongside the Helen Joseph public hospital near Auckland Park.

Construction is being undertaken by black-owned contractor Maziya General Services, partnering with construction materials leader AfriSam for its supply of readymix concrete and bagged cement. When completed in May 2020, the new Johannesburg Forensic Pathology Laboratory will become the main centre for these pathology services in the city. It is being built for the Gauteng Department of Infrastructure Development.

In addition to the laboratories themselves and the related office space, the building will also include educational facilities as training is an important element of the facility’s role. The building therefore includes a double-volume, state-of-the-art auditorium, according to Chris Delport, managing member of Maziya General Services. This will serve the universities in the area, and the nurses training colleges. 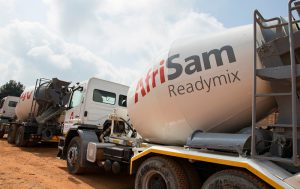 The building’s façade is a Grade 2 smooth concrete finish with no treatment, so care is taken to achieve a uniform colour throughout. To ensure a high quality finish, AfriSam constantly optimises the mixes supplied, says AfriSam territory manager Antonio Benjamin.

As the building is Green Star rated, the concrete being supplied contains slagment as an extender and this reduces the carbon footprint of the product. Standard mixes use 50% slagment, while enhanced mixes use 28%.

A total of over 15 000 m3 of readymix concrete will go into the project by the time it is complete, says Benjamin. Supplied from AfriSam’s Prolecon plant, readymix deliveries began in August 2017 and will continue until the finalisation of concrete work around May 2019. The readymix has been provided in three strength categories – about 260 m3 of 15 MPa for blinding, 10 500 m3 of 30 MPa for the in-situ casting of slabs and 1 300 m3 of 40 MPa for the columns and walls. 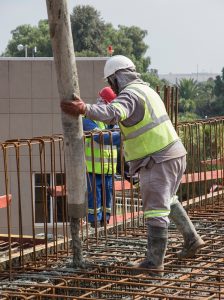 Earthworks kicked off in October 2017 and continued for about three months, says Delport. Considerable levelling was required due to the slope on the site, with 15 to 20 metres of excavation required.

Following the earthworks stage, extensive piling, to accommodate the stepping on the sloping ground, was done for the four different levels. Over 200 piles – usually 450 mm or 600 mm in diameter – have been driven and poured to a depth of eight to 10 metres. He says that various ground conditions were dealt with, including quartz, hard-scale and sand. The piling was completed by early 2019, and pile caps were then poured on which columns could be constructed.

The building includes a basement at minus 2 level, where there will be parking and service rooms for generators, water plants and heaters. Above the basement, three floors are being constructed, completed with a roof slab. After completion of the concrete work, there will be some limited brickwork with partitioning and aluminium window frames and glazing. Maziya General Services will manage subcontractors and take the building through to full finish, where it can be handed over as a fully functional laboratory. 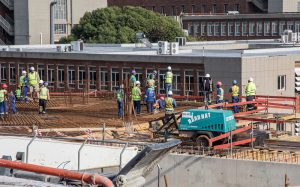 The project is an Expanded Public Works Programme (EPWP), one of government’s key initiatives for providing poverty and income relief through temporary work for the unemployed. The programme provides an important avenue for labour absorption and income transfers to poor households.

“We employ between 50 and 70 young workers from the local areas and upskill them over the project’s two year construction period,” says Delport. “This is an important strategy for us to be able to ‘give back’ to the community in the way we conduct business.”

With management, administration and subcontractors on site, there are about 150 people working on the project at any one time, he says. Maziya General Services deploys a range of its own large and small plant on the project, including a tower crane, two mobile cranes, a water bowser, tractor-loader-backhoes (TLBs), excavators, bobcats and compactors. 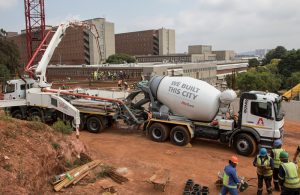 As the building is Green Star rated, the concrete being supplied contains slagment as extender and this reduces the carbon footprint of the product

Established in 1999, Maziya General Services has expanded its offerings into the broader infrastructural development value chain. With capacity and resources to deliver a range of projects, it holds a Grade 9 rating from the South African Construction Industry (CIDB).

“Our multi-disciplinary skills base means that we can offer a single-point responsibility to our clients,” says Delport. “We are known for delivering solutions to clients on time and within budget in a socially and environmentally responsible manner.”