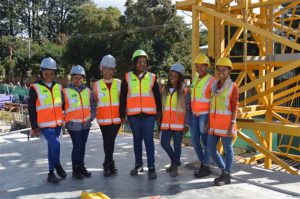 Female entrepreneurs are go-getters, they don’t wait for things to happen – Omega Mashaba

Entrepreneurial women are making their mark in construction, but more needs to be done. Doing so will have benefits.

Construction remains a male-dominated industry but there are signs that women are starting to become better represented in this sector – to its great potential benefit. Unsurprisingly, given the nature of the work itself, women are primarily making their mark in managerial and administrative roles, and a growing number of smaller construction companies are headed by women.

Figures from the Construction Industry Development Board (CIDB) show that 48% of the country’s construction enterprises are owned by women. However, the vast majority of these are very small companies – 95% fall within grades 1-3 (able to handle low-value contracts only), while there are only eight woman-owned enterprises at grade 8 (the highest value contracts).

What these figures say to me is that while women are entering the industry in greater numbers, they are finding it hard to scale their businesses. Ahead of Women’s Month this year, I spoke to two of these standard-bearers for women in construction to find out what drives them.

Bana Afrika established her business, Ampersands Investments, in 2014, having studied construction at tertiary level. She found being an employee intensely frustrating, and realised that opening her own company was the only option. She took the franchise route, buying a roofing and waterproofing franchise. “We understood that, as a start-up, it would take too long to create processes and to build a reputation,” she points out. “Through the franchise, we were able to build good relationships with corporate clients and it opened up big opportunities for us.”

Omega Mashaba founded her company, Mash n Go Renovations a year later. For her, a key impetus was to create employment by helping previously disadvantaged individuals acquire experience and skills. “We believe in equal opportunities, so we give opportunities to both men and women,” she says. “By sharing skills and expertise, we don’t just help them, we also grow the business itself.”

Both Afrika and Mashaba testify to the power of networks. Afrika says that building a network is critical because people do business with people they know. In Mashaba’s opinion, while the old boy’s network is still very much in place in corporate boardrooms, the growing numbers of women entering the industry with the skills and ambition to be good employers is changing the status quo.

One of the damaging stereotypes about women in business is that they compete with each other. Afrika says that women have to become “stepladders”, helping other women to make their own ascents.

Mashaba pays tribute to the power of ambitious women. “Female entrepreneurs are go-getters, they don’t wait for things to happen – they make them happen,” she enthuses. “One thing the media could do is promote stories about successful women, and provide information about how female entrepreneurs can access capital.”

Afrika adds: “We need to unteach the notion that employment is the only answer. We need to teach innovation and creativity so that the unemployed see their situation as an opportunity. Instead of just creating employees we should also create entrepreneurs.”

Despite its current challenges, a healthy construction industry is essential for an economically successful country. Women can make a huge contribution especially in the administrative, managerial and leadership areas – and successful women tend to invest in their families, creating a multiplier effect that benefits society as a whole.

What can we do to help? The Master Builders Association North is partnering with one of its members, JDP Roof Cover, to create a training academy to train women and youth – we are actively looking for other partners in the industry to pursue similar initiatives. Maximising the value that women, and especially female entrepreneurs, can bring to the industry is in all our interests.