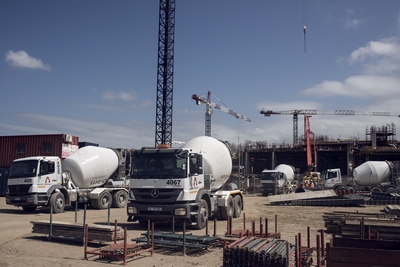 Not only will Dr Pixley ka Isaka Seme Memorial Hospital bolster state health care services in the northern areas of Durban, but the building programme is also transferring skills to communities in KwaZulu-Natal that are in dire need of upliftment.

AfriSam is supplying all of the concrete requirements for the build.

This massive build is being undertaken on behalf of the KwaZulu-Natal Provincial Department of Health by a joint venture (JV) between Aveng Grinaker-LTA Building, the lead contractor, and Enza Construction. The onus also lies on the JV to meet the department’s very strict mandate of maximising the delivery of this infrastructure to benefit the poor areas of Inanda, Ntuzuma and KwaMashu (INK).

The socio-economic requirements of the construction programme have added complexities to an already challenging project. Skills transfer is just as important as completing the hospital in two years’ time – October 2018.

Stuart Meyer, contracts manager of Aveng Grinaker-LTA Building, says the method of construction has been kept as simple as possible to ensure as much involvement by members of the local community as possible.

“We had various options to choose from, but we decided to opt for a traditional coffer slab system. It requires handling about 2 400 tons of support work, but it offered the best opportunity to increase the number of people working on site,” he says.

“It can best be described as a basic ‘Meccano’ system and, although not the quickest manner of building, it is easy to understand and very safe.”

The installation of the system is being undertaken by 16 members of the community, with the help of nine formwork specialist companies from the surrounding area.

The JV is definitely meeting its objectives with its labour based construction methods considering that there were already 650 people on site in mid-February.

By this time, work had started on stripping and the installation of services. Once the latter is in full swing between 600 and 800 additional hands will be needed. Meyer estimates that there will be about 2 000 people working on the site by the end of this year.

One of the major milestones on the programme will be the completion of most of the structure at the end of August this year – well ahead of the initial deadline of the first week of December. This is before the JV starts locking blocks to begin the major task of tackling the extensive fittings and finishings. In mid-February, work had also started on selecting the sub-contractors to undertake the major works packages.

The building has been divided into 10 blocks – A to J – as well as a K section, comprising the plant room, parking area and towers.

Constructing this 100 metre by 300 metre structure, comprising a lower ground and ground level as well as first and second floors, a plant room, roof and towers, calls for very careful planning. The contractors have to keep to a rigid schedule to ensure production continues unhindered so that final locking up can start in March 2018, the year that the remainder of the structure and services will be completed.

“From the outset, we decided to complete as much as possible that we have direct control over early on in the programme, preferably within 18 months. This leaves us with a lot of time to complete the finishings,” Meyer says.

To make its deadline, crews work on between 16 and 18 decks a day, with between five and seven completed in a week. Single shifts are worked, and Saturdays are used to gain time, if necessary. The various aspects of the work are undertaken according to a very strict weekly programme, with each deck broken into 15 different items with set deadlines for completion. “These have to be met at all costs and everybody knows this. There are no excuses to achieve the stipulated outputs,” says Meyer.

AfriSam is supplying all of the concrete requirements for the build. A competitive edge for the largest concrete solutions producer in the country is its large black ownership. This in line with the high Broad-Based Black Economic Empowerment requirements that have to be met on this public-sector contract. For example, one of the key outcomes of the build is that 30% of all sub-contracts are let out to 100% black-owned companies.

AfriSam delivers 600 m3 of concrete to the site every day mainly from its new batching plant in Phoenix, which was established especially for this project. This plant services what is referred to as the P.I.N.K. area which encompasses Phoenix, Inanda, Ntuzuma and KwaMashu. Located a mere 1,5 km away from the project, six readymix trucks are dispatched from this site every day, while three more deliver concrete from its Ottawa operation. This mitigates any risk, should there be an unforeseen interruption at one of the plants.

A total of 43 000 m3 of concrete is being supplied and the building materials producer did all four mix designs for the slabs, suspended slabs and columns.

AfriSam’s Marietjie Thompson says about 80% of the concrete for the structure has a compressive strength of 30 MPa and is designed to cure in 28 days, while 35 MPa concrete is being used for the columns.

She says one of the challenges for the company is co-ordinating deliveries to the site to avoid any delays to the contractor’s tight schedule.

In the beginning, AfriSam also helped the JV manage the arrival and use of various mixes on the site. Bear in mind that the contractor opted to do its own concrete pumping, using its own static and mobile unit.

There are 24 lift shafts and hoists in the structure. Meyer says this aspect of the build is extremely complex and therefore time consuming. To keep production moving, slabs, which are split into two 280 m3 sections, are poured just beyond the first pane of the shafts.

With the core of the workforce comprising unskilled workers, the JV has to keep a close watch on the quality of the workmanship at all times. “We are employing many unskilled people and in the beginning we did experience problems. However, we have managed to resolve many of these over time,” says Meyer.

At present, the project employs about 100 bricklayers who handle 35 000 bricks a day, and 500 plasterers. This aspect of the project alone will require about 500 additional hands over the next four to five months.

In order to ensure transfer of skills a core team, comprising 140 specialist workers, has been divided between the various foremen on the site.

One of the advantages for Aveng Grinaker-LTA Building is its past experience working on building and civil infrastructure projects in the area. Before arriving on site, it embarked on an array of initiatives to ensure community buy-in.

These initiatives have ensured the JV receives immense support from both INK Trust and the larger eThekwini Municipality which will certainly help it meets its targets during what Meyer describes as a “massive year” for Dr Pixley ka Isaka Seme Memorial Hospital.