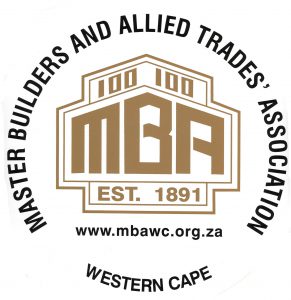 The construction industry is a major employer in any growing economy. Within the South African context, the Master Builders Association of the Western Cape (MBAWC) has established a proud tradition of producing skilled and semi-skilled people who have worked on major projects all over Southern Africa through training initiatives.

Tony Keal, Group Skills Facilitator at MBAWC says: “In 2018, we invested over R1,9 million on training costs – a large percentage of which was spent on apprentices who are given the opportunity to earn while they learn by being placed with our member organisations for experience whilst undergoing training funded by us.”

At the organisation’s recent Annual General Meeting, awards were bestowed upon two apprentices who have shown particular promise as future master builders. Ryan Castle from Grassy Park was awarded the Buckland Apprentice of the Year Award, while the Rob Johnson Award for Specialist Apprentice in the Carpentry Trade went to Lylle Steyn from Fairways. 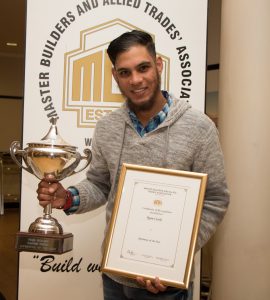 Ryan Castle was awarded the Buckland Apprentice of the Year Award

Castle, who joined the MBAWC’s apprenticeship programme in 2016, has completed all of his theoretical and practical training whilst doing his in-service on-site training with GVK-Siya Zama. His employer has praised his eagerness to learn and sharp focus on any task at hand. He is currently waiting to take his trade test.

On winning the award, he says: “I am very proud of myself. I am a lucky guy and I do win a lot of things, but this particular award is an achievement for me. I am a hard worker and a go-getter so I don’t just do what is asked of me, I go the extra mile.” Looking to the future, he would like to either start his own construction company or work overseas. 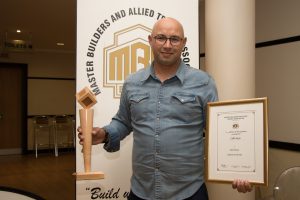 Lylle Steyn, recipient of the Rob Johnson Award for Specialist Apprentice in the Carpentry Trade

Steyn, who also joined the programme in 2016, is completing his in-house training at GVK-Siya Zama too. His positivity in the workplace and can-do attitude, together with his steady pace of work and performance on site have been noted by his employer. He too is waiting to take his trade test.

He believes that he was selected because he works hard at everything he does. “I always try to do my best.” Steyn shares that he was drawn to a career in the construction industry because it enables people to expand their horizons, thanks to the vast experience that can be acquired on site. With what he has gained from the MBAWC apprenticeship programme, he plans to open his own business.

Both Castle and Steyn are working under the leadership of Donald Perreira who was the Apprentice of the Year Award recipient in 2016 and is today a supervisor in the industry.

For more information about the MBAWC’s apprenticeship programmes and other training initiatives, please visit http://mbawc.org.za.