144 Oxford Poised For Completion In November

Conceived by Growthpoint Properties in 2015, this prestigious and iconic R1.2 billion 36 700 m² premium-grade 144 Oxford Road office development in Rosebank, Johannesburg, is aimed at capitalising on the demand for office space in the popular precinct.

Growthpoint appointed Paragon Architects South Africa to bring this architectural dream to reality. Featuring two extended office towers connected by a central atrium, this striking development consists of nine occupiable floors and six basement levels for parking. Taz-Wynne and his team of seven architects worked closely with the client for some six years – finalising the design through a range of iterations, complicated along the way with changes in tenant and the ironing out of logistical challenges before construction could begin. 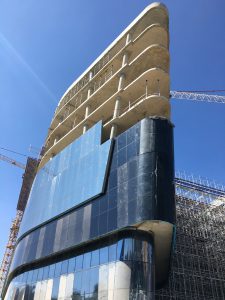 “We are very proud as a team to have achieved all of our design objectives to the client’s satisfaction,” says Taz-Wynne. “Our ongoing interaction with all members of the Professional Team was of the highest level, with sharing of ideas and resolving challenges together enabling the project to be ready for hand-over at the end of this month [First week of November 2019].”

A primary feature of this striking building is the imposing central atrium which interconnects the two office towers. A 25 m steel girder spans the top of the atrium, creating a massive open area free of columns. The girder also supports the glass façade by means of steel beams spanning the same length of the girder, onto which the glass is clipped. As space is a crucial element of the overall aesthetic of the building unwanted columns would detract completely from the design criteria of the atrium.

“Every part of the building has performance glass of different types, based on the planning of the building” explains Taz-Wynne. “On the northern side, for example, there are three types of double-glazed glass systems: 50T, which is a more clear lower performance glass which doesn’t reflect much sunlight; then a Cool-lite ST120 glass – a higher performing glass which is very reflective allowing very little heat through; followed by a Solar E plus grey, darker black-grey glass – slightly less performing which, being dark in colour, attracts more heat.”

The scope of Paragon’s design includes all common interior floor space of the building, including the atrium, bathrooms and common passageways. Each tenant is free to design their own interior space to while following a Tenant Criteria Document provided by the property owner. 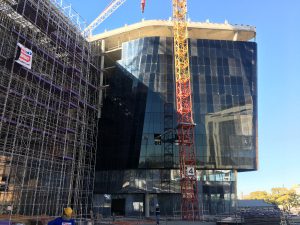 As tiles play an important role in the interior design, only the best Italian tiles, being world leaders in this field, were selected for this purpose.

144 Oxford is well positioned with Gautrain nearby and directly opposite the Rosebank Shopping Mall and The Zone, enabling refreshing walking in an urban environment and enjoyment of its retail space. Dedicated traffic lights opposite the entrance to 144 Oxford encourage pedestrian access.

On construction challenges, Taz-Wynne points out that logistics played a key role as no lay down area was available on the site. This meant that all façades were pre-fabricated off-site and were then installed immediately on delivery, which was tightly planned and coordinated and thus required no storage on site.

Initially the building was designed for a 4-Star Green Star design. However as construction progressed it soon became clear that a 5-Star Green Star Design Certification from the Green Building Council of South Africa (GBCSA) was quite feasible as the design was nine points ahead of the GBCSA requirement for a 5-Star rating. 144 Oxford currently awaits confirmation of this rating application from GBCSA. A four star design rating was achieved.

Façades, blinds, electrical systems, lights with motion detectors, recirculation of radiant heat and harvesting of rain water are all primary contributors to the 5-Star Green Star rating – as is the planting of indigenous plants in the deceptively large garden area, creating a very important aspect of the exciting vibe of the building as a whole..

The roof is a functional combination comprising a flat concrete roof housing mechanical plant – with air circulation going through a second “soft” roof above the main roof. In addition to two full backup generators have been installed to keep the entire building fully operational during power outages. 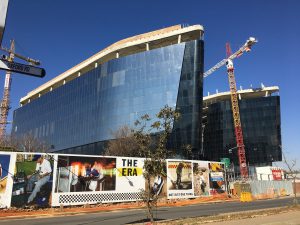 “The entire Paragon team, contractors and the main contractor – Tiber WBHO JV – are extremely pleased with the outcome of this complex project, on time, and ready for hand-over to client in a few weeks’ time [beginning of November 2019],” concludes Taz-Wynne.

Construction of 144 Oxford was undertaken by the Tiber WBHO Joint Venture (JV).

South African Builder also conducted a Q&A session with JV partner, Tino Pereira, Director of WBHO Building North in order to gain further insight to the construction process on the project, its logistics, challenges and solutions: 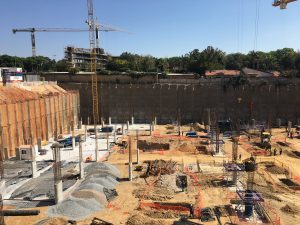 SA Builder: Tiber Construction and WBHO have built significant synergy over time to complete projects such as this. Could you describe briefly how the teams have forged such strong and effective operational relationships.

Tino: The successful partnership goes back to 2011 when we completed our first JV Project, Alexandra Forbes. The like-mindedness of senior management and the culture of excellence in delivery of the respective company’s employees have made us a formidable leading JV in the industry – this was a large contributing factor to the initial success. In creating a strong history of successfully completed mega projects, the relationship has only grown from strength to strength. A further contributing factor was the decision to fully integrate skilled staff and management resources on the JV’s, thus creating a team atmosphere rather than unhealthy competition, ensuring that we are all united under one common goal: the success of the Team. Team building sessions are held periodically to further integrate and strengthen the good team work flow ethic. Mutual respect between individuals has been encouraged and cultivated from higher management filtering down to the guys on the ground. 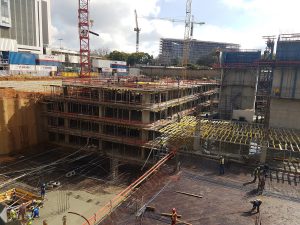 SA Builder: In the case of 144 Oxford, what skills and capability strengths did your company bring to the project? And outline the general modus operandi between the two companies in this JV project.

Tino: Both companies added to the skills and resource pool, while one company may have had a team member more experienced in management aspects, the other company would complement this by providing experience in a more technical role. Past experience from other projects on the successes and failures was instilled into the team. We both believe in the integration of experienced, very skilled tradesmen with that of dynamic youngsters which has created a very well balanced team at 144 Oxford. 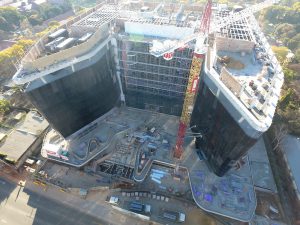 SA Builder: What were your primary challenges encountered during construction? In particular the steel structures and installation of the façades.

Tino: The Atrium was highlighted at the outset as probably the most challenging aspect of the project and to this end the JV encouraged the professional team to fast track the procurement and the shop detailing of the intricate design elements. After numerous design and buildability sessions, the erection of the steel girder requiring special road closures and regular interim inspections to ensure the steel work performed to design criteria. The complexity of the transfer structure on the ground floor required close coordination between the structural design team and the architect – this proved to be key to the successful buildability of this level. Other key elements requiring close buildability sessions were the sloped façade on the noses. 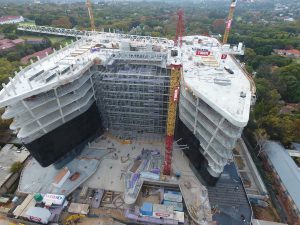 SA Builder: Did you experience logistical challenges of any sort?

Tino: The proximity of the project to the busy Oxford road, restricted access on Tottenham road imposed by the Melrose Residency Association (MRA) and the sensitivity of having surrounding schools in the area required close cooperation between all parties to ensure deliveries were scheduled to a strict timetable and adhered to.

SA Builder: Were you able to accommodate all the architect’s requirements? To what extent were adjustments required and in which disciplines?

Tino: Some of the architectural challenges on this project were quite unique, as each project designed by Paragon is not like any other in the industry or even like any other they’ve designed. Most of their projects simulate futuristic shapes and concepts. Some internal design details being quite unique and out of the norm require regular workshops and buildability sessions and normally achieve the right end goal set out by Paragon.

SA Builder: Were you affected at all by late re-design requirements by the client?

Tino: The project started out as an hotel and office development at the end of 2017, but soon after taking site hand-over the hotel was removed from the scheme and replaced with offices, which required a complete redesign of the building. The professional team managed to mitigate some delays by working fervently through the builders break to enable a restart towards the end of January 2018. 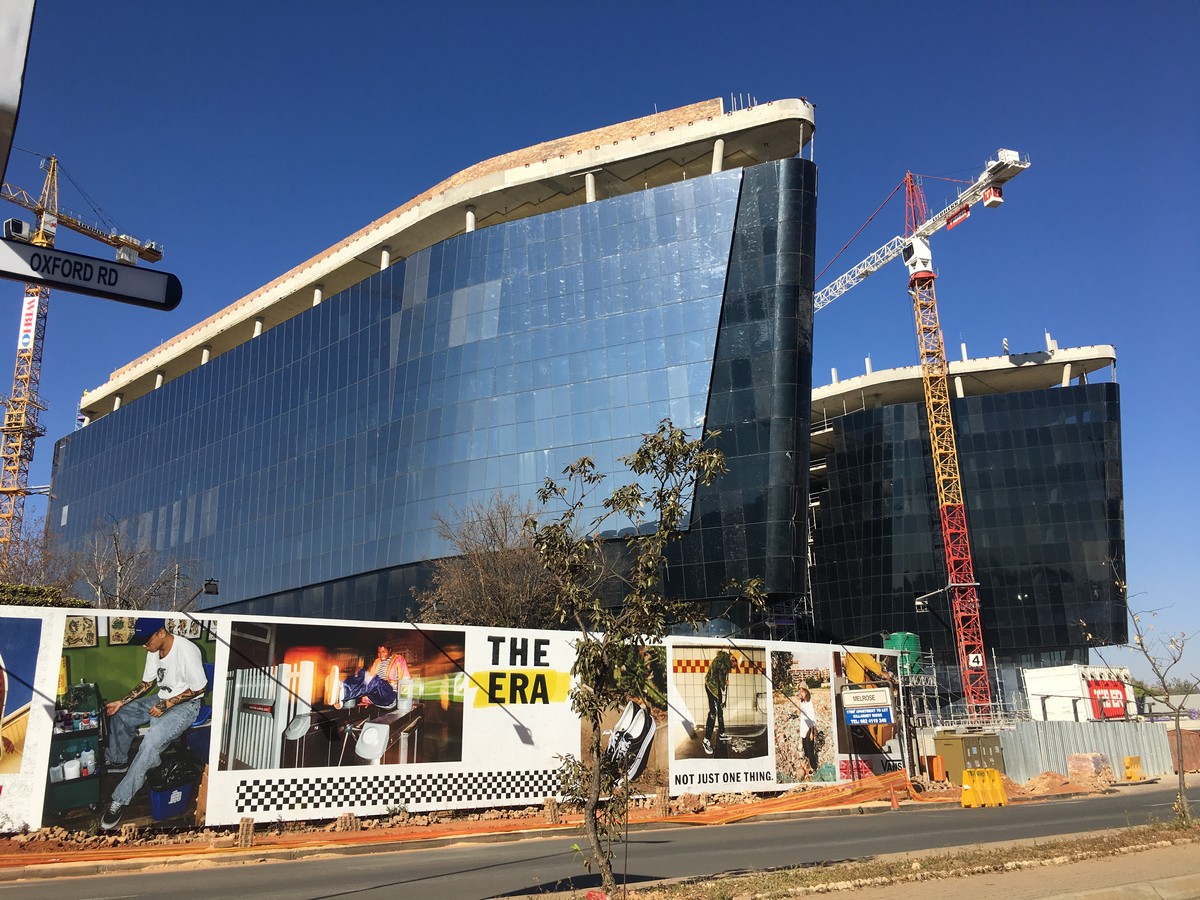