Garden Cities was established, and built its first suburb, Pinelands, in the early 20th century under vastly different circumstances from the present and now continues to lead the way in the provision of housing in post-millennial South Africa.

The non-profit group has established 17 suburbs in and around Cape Town and is currently working on three of the biggest human settlements surrounding the city – Sunningdale on the West Coast, Pinehurst in the north, bordering Durbanville, and Greenville, in Fisantekraal, where housing is being provided across the entire economic spectrum.

The suburbs are developed in their entirety and include infrastructure such as schools, shopping centres, medical facilities, business premises and even a dog park.

Established by a Cape Town businessman Richard Stuttaford in 1919, Garden Cities is still under the leadership of the Stuttaford family and the current Chairman, Sean, is the great-grandson of the founder.

Against the backdrop of Table Mountain, Sunningdale, Garden Cities’ West Coast flagship suburb has grown steadily since it was established over 20 years ago. In line with Garden Cities’ planning principles, facilities are continually added to meet the needs of residents as the development expands. They include shopping centres, a major hospital, schools, sports club, urban open spaces – and even a now-famous dog park. Sunningdale, is currently one of three suburbs being developed simultaneously by Garden Cities.  The others are Pinehurst near Durbanville, and Greenville, at Fisantekraal, to the north of the city.

Garden Cities was the inspiration of British urban planner Sir Ebenezer Howard in response to the appalling conditions in which many English people lived at the start of the 20th century. 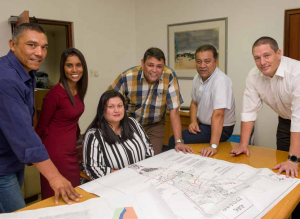 He proposed that new towns should be planned to provide pleasant living environments, public parks, adequate space for schools, playing fields, hospitals, churches, shops, and most significantly, businesses and light industry to employ residents of the towns.

His first town was Letchworth Garden City which was built near London from 1907, followed by Welwyn Garden City in 1917.

Garden Cities in South Africa started on June 19, 1919 when the government granted 365 morgen of the Uitvlugt forest reserve to the Garden Cities board of trustees, chaired by Richard Stuttaford, and made up of businessmen and senior civil servants. Set-up capital of £10 000 was donated by the chairman. The first house was built in Pinelands, in 1922.

The company grew into a sizable organisation with a number of subsidiaries, in order for it to generate sufficient funding for development, In recent years, profits have been used to build school halls and to provide science laboratories in under-resourced schools in the Western Cape. Garden Cities has a long history of providing bursaries to university students, as well as annually making large donations to various charities. 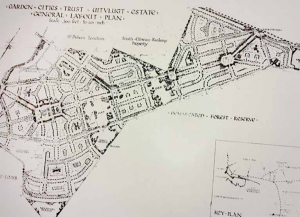 But when the time came to venture further from the shadow of the mountain, it was Garden Cities that made one of the boldest moves into uncharted territory

Garden Cities has been pushing the boundaries, both physically and metaphorically, for one hundred years. It has created serene, well-ordered communities in places where others had not thought to go.

And as the years passed, and social conditions changed, it was sometimes ahead of the times and at others it adapted quickly to accommodate the unexpected.

When the time came to venture further from the shadow of the mountain, it was Garden Cities that made one of the boldest moves into uncharted territory.

Garden Cities has stuck close to its roots, which today makes it one of the rare family companies that still has members of its board of directors bearing the name of the founder, three generations later.

Richard Stuttaford’s action is the stuff of legends. It launched one of the most successful mass residential community development projects in South Africa.

In its centenary year, Garden Cities has a record of having established 17 suburbs in Cape Town and has been responsible for the building of more than 20 400 homes. They cross the entire economic spectrum from starter homes, for those who have never owned a property, to houses for middle-income families in immaculately structured urban environments.

Richard Stuttaford was fired up by the prospect of applying the principles of Ebenezer Howard’s Garden Cities movement, in South Africa. His was a broad-ranging proposal that, following the principles of the then still fledgling UK Garden Cities, would take developments to the edge of Cape Town’s urban core, and create independent commercial and residential environments. It was Stuttaford who urged the government to change its attitude to mass housing.

The board took a strategic decision to ensure that, while Garden Cities would continue to generate revenue from its core operations, it would re-direct a portion of its income to the needs of disadvantaged communities in Cape Town

In 2005 Sean Stuttaford, while remaining a Garden Cities director, moved to Johannesburg where he saw a new integrated development called Cosmo City. It was this town that stimulated a new vision of where Garden Cities should go.

The result was Greenville Garden City, an integrated town near Durbanville. The planning phase of this development took seven years and R20 million to get off the ground. The project included extensive research as well as investment in new building technologies which became necessary to deliver a Garden Cities product at an affordable price.

The strategy of the board is that Garden Cities, being a not-for-profit company, needs to play a role in researching, testing and developing new building technologies. As a developer, Garden Cities can bring these innovations to the building and construction industry, and if viable, provide a platform to launch them.

Greenville is a huge undertaking and thought to be the only public-private partnership (PPP) in the country where low cost government housing is being delivered on private land.

It’s not likely that Garden Cities, on its own, will be able to develop or deliver on future demands. It will need partners who can assist in achieving the vision.

Sean says that it is this broad wealth of experience and skill which has been the hallmark of the type of directors Garden Cities has been privileged to attract over the past century and which has ensured its success. It is his hope that future generations will apply the same level of care when appointing people to the board.

He also pays tribute to John Matthews, who arrived at Garden Cities as a young man from university, and eventually became the obvious choice for CEO of the company – a position he holds now in a group capacity that covers both Garden Cities and its construction arm Pinelands Development Company (PDC).

‘We could not have done it without John,’ says Sean. ‘He implemented the vision.’ 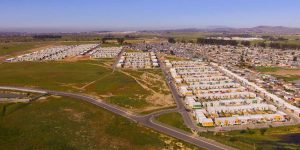 John Matthews and Tony Marsh took over the project. One of the first needs that had to be identified was a building material and method that would both accelerate delivery and provide all the quality elements needed for the houses.

This was found in an Australian company called Benex, that provides revolutionary building material and methods that have been adopted in the construction of the houses at Greenville.

Throughout its history, Garden Cities has honoured its mission to promote social upliftment through the delivery of quality affordable homes in safe healthy environments. In the light of challenges facing society this century, Garden Cities has committed, as far as possible, to ensuring that its property developments are built to not only be resilient to current and future environmental risks but, more importantly, to giving their residents the opportunity to make daily changes to restore and maintain the balance between man and nature.

Garden Cities’ vision is to build homes, amenities and entire suburbs that are water sensitive, powered by clean renewable energy, and the use and disposal of materials with minimal impact on natural systems.

The Garden Cities Green Building engagement programme involves government, community and private sectors learning and working together to achieve more than any one sector could achieve on its own.